Instead of simply congratulating the students for their hard work and wishing them the best in the future, he spent time talking about how we’re a godly nation — and if you want proof, just look at the words in our currency! (Because that’s how proof works when you’re ignorant.) 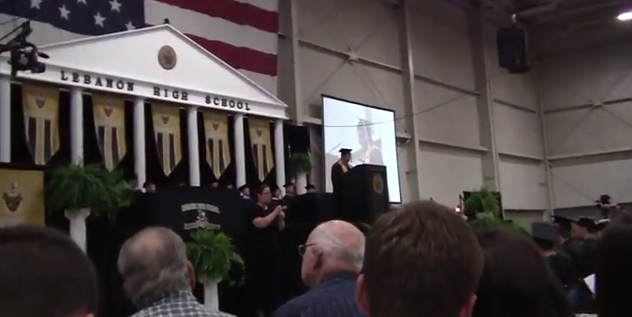 … the most important line of all, “One Nation, Under God.” [Cheers and applause] In fact, I’d like to remind our graduates that our nation’s motto is, in fact, “In God We Trust.” If you’re ever in doubt, just take a quick look at our nation’s currency and you’ll find out for yourself. A similar phrase appears in the final stanza of “The Star-Spangled Banner.” Written in 1814 by Francis Scott Key and later adopted as the U.S. National Anthem on March 3, 1931 by U.S. President Herbert Hoover, the song contains in early records [to have a] variation of this phrase: “And this be our motto: ‘In God is our trust.'”

In one of the most famous sentences in American History, taken from our Declaration of Independence, reads, “We hold these truths to be self-evident, that all men are created equal, that they are endowed by our Creator with certain unalienable rights, that among these are life, liberty and the pursuit of Happiness.”

This passage has come to represent a moral standard to which the United States should always strive. And even though God is reflected in the very fabric of our nation, we are told that it is inappropriate and even illegal to mention God at high school graduations, let alone say a prayer.

So while it would not be politically correct for us to have an official prayer this evening, I would like for us to have a moment of silence in honor of tonight’s graduates.

Thank you. And just in case you’re interested, during my moment of silence, I gave thanks to God for these great students, their parents, their teachers, and for this community.

Thank you for indulging the thoughts I had during my moment of silence. And yes, God is still important, and let us not ever forget it.

Jerry Coyne says this is “clearly a violation of the First Amendment.” I’m not a lawyer, but I don’t believe it is. Lowery didn’t actually ask everyone to pray or make any explicitly Christian references.

What he did was, however, completely inappropriate for a public high school graduation. Had a Muslim principal or non-religious principal or Wiccan principal done anything even remotely similar to what Lowery did, it would be national news.

Lowery could’ve saved some time by just flipping off all the atheists in the audience because his contempt for them was crystal clear.

It’s not just that he gave a speech about the importance of God at a time when students and teachers deserve all the credit for the graduates’ success. It’s that he failed to point out that many of his examples of God in our nation’s history came from when we were trying to distinguish ourselves from godless Communists during the Cold War.

“One Nation, Under God” wasn’t added to the Pledge of Allegiance until the 1950s.

“In God We Trust” didn’t become our national motto until the 1950s.

The phrase wasn’t added to our paper currency until the 1950s.

You get the picture.

What Lowery did wasn’t necessarily illegal, but it was the sort of speech only an arrogant Christian could deliver. And that’s putting it nicely.

I would love to hear from any Lebanon High School graduates who were offended or upset by his comments.

Lowery may just laugh off any threat of a lawsuit — he dickishly toed the line, but I don’t believe he illegally crossed it — but the media may be interested in hearing from graduating students who were upset by the way he used his final opportunity to speak to them to spout his personal religious beliefs.

June 1, 2014 I Guess This Christian Apologist Learns Nothing from Women
Browse Our Archives
What Are Your Thoughts?leave a comment