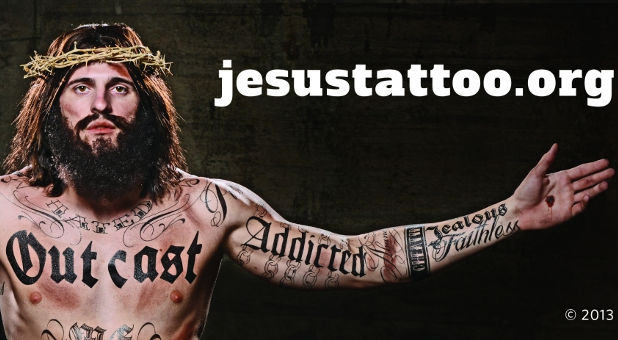 So, naturally, the man behind JesusTattoo.org filed a lawsuit claiming his rights were being violated.

He may have had a point. According to the lawsuit, the district allowed ads from Lubbock Christian University on the billboard while allowing other religious groups to advertise at other sports venues in the district:

However, Elie Mystal of Above the Law Redline said that didn’t mean the Jesus billboard would get a free pass:

There’s no doubt that the ad in question was fully pro-Jesus.

Still, that didn’t stop the (misnamed) Alliance Defending Freedom from fighting for their client:

This week, the case was finally resolved when a federal judge ruled that the school district was right to reject the ad.

Part of the reasoning offered by the district? Hilarious:

The first reason offered to Plaintiffs for denying approval to run the advertisement is that Defendant maintains a no-visible-tattoo policy for its students and faculty while on school property. Defendant further supports its position by relying upon Texas law generally prohibiting tattoo artists from providing a tattoo to anyone younger than 18 years of age. Defendant argues that running the ad would have undermined Defendant’s tattoo policy because the ad was based upon conduct prohibited by Defendant’s dress-code policies.

Even if the tattoos were removed from the image, the URL would’ve remained the same, causing a problem for the district.

The other reason cited was much more to the heart of why the judge sided with the district:

… The Court finds, as argued by Defendant and admitted by Plaintiffs, that Plaintiffs’ ad is properly characterized as a proselytizing message designed to advance Plaintiffs’ “sincerely held religious beliefs” to the viewer.

As such, the Court finds that the subject matter of the “Jesustattoo” advertisement was religiously oriented and sought to advance a religious message. Thus, the ad “is not of a similar character to any previous use of the school’s [forum].”

In other words, it would’ve put the district in jeopardy of another lawsuit claiming they were endorsing Christianity.

The ADF is none too pleased with the decision:

Kerri Kupec of the Arizona-based Alliance Defending Freedom representing Little Pencil said in an email, “We are disappointed with the court’s decision and are evaluating our options for appeal.”

LISD released this statement: “Throughout this process, we have asserted that our actions were in keeping with district policies, state and federal law, and we are pleased that the court ruled in favor of Lubbock ISD. We will continue to focus on our mission of educating students and hope we can put this behind us and give our complete attention to that important work.”

It’s the right call. Had the judge allowed the explicitly Christian ad, I promise you atheist advertising would’ve come next… hell, I would have started fundraising for it immediately.

(Large portions of this article were posted earlier. Via Religion Clause)