How Many Atheists and Agnostics Are Graduating from Harvard…? May 29, 2014 Hemant Mehta

How Many Atheists and Agnostics Are Graduating from Harvard…?

And we’re 38% of the graduating class at Harvard, according to survey results posted on The Crimson‘s website: 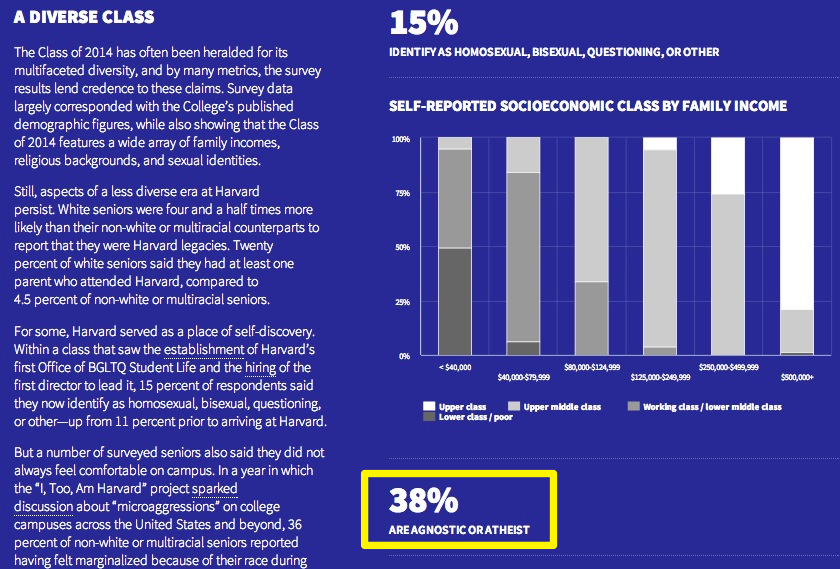 Take those Harvard numbers with a grain of salt, though. It was based on a self-reported survey that only about half of the graduating class responded to:

Nearly half of the class — 758 people — responded to an email survey conducted from May 13 to May 20, though not all of them answered every question.

You could easily argue that many religious students, even with the promise of anonymity, didn’t want to divulge their faith on the survey.

Still, even taking that into consideration, it does appear that Harvard’s graduating class is more non-religious than the public at large, a result that falls perfectly in line with other studies showing a correlation between education level and non-religiosity.

I asked Harvard’s Humanist Chaplain Greg Epstein what the numbers, even if inflated, meant to him, and he told me this (via email):

… It means the Harvard student body is consistent with a huge trend that has swept the nation and that is not going to change any time soon: this is what the future looks like. America is going to become much, much less religious. And that will be a great thing for religious and nonreligious people alike, provided we can encourage and nurture the many positive qualities these nonreligious young people are, in my experience, likely to demonstrate: thoughtfulness, critical reasoning, compassion for the less fortunate; acceptance of all people and welcoming diversity; comfort with ambiguity; comfort with diverse sexual identities; creativity; humor and wit; passion to improve the world and make a difference.

However, we also need to work at addressing some of the drawbacks to being nonreligious, and not just the obvious and quite annoying fact that we still face prejudice and discrimination in too many ways. We need to work on creating communities that can address isolation and help with the loneliness of modern life, especially after graduation.

We need to support one another better in emphasizing that Humanist values mean we don’t need to be perfect or win every award or achieve every goal or earn every last dollar — though we do need to be ethical citizens of the world, while also building lives that can fulfill us as individuals. Secular and Humanist communities need to be relevant to the lives of these young secular people, otherwise we’re never going to gather and mobilize enough of them to make political change.

At Harvard, where we’re proud to have been able to build the Humanist Hub, the first on-campus “Center for Humanist Life” supporting atheist, agnostic and nonreligious students (as well as the general public), being relevant can sometimes mean simply providing a safe space where high-achieving young people don’t need to achieve anything other than allowing themselves to relax, be themselves, and truly connect with one another.

May 29, 2014
Good Advice if You're Going to The Amazing Meeting
Next Post

May 29, 2014 Canadian News Host Has No Idea Why a Government-Supported, Christian-Themed Park is a Bad Idea
Browse Our Archives
What Are Your Thoughts?leave a comment