A Non-Compete Clause for Christ May 29, 2014 Hemant Mehta

A Non-Compete Clause for Christ

If you’re a leader in Pastor Mark Driscoll‘s Mars Hill Church network, and you leave the business ministry for any reason, a clause in your contract prevents you from being a church leader anywhere within a ten mile radius from another Mars Hill church.

Which means you really can’t go anywhere in the Seattle area, as you can see in this picture by @piratechristian: 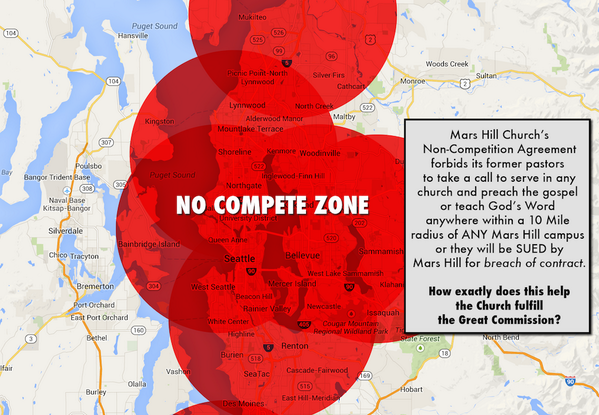 It’s essentially a non-compete clause for Jesus, according to Patheos’ Warren Throckmorton. And it’s already led to the firing of one pastor who refused to sign the contract.

You know, it’s one thing to include such a clause in a contract when an employee might work for a competitor. But this particular clause is listed in a section of the contract ironically called “Unity of Mission.” Because allowing staffers to work at a nearby church would confuse people about how faithful to Christ they really are, I guess.

May 29, 2014
A Guide to the Sovereign Grace Ministries Scandal and the End of New Calvinism
Next Post