Why Does This Public High School Football Team in Georgia Have an Official Pastor? May 28, 2014 Hemant Mehta

Why Does This Public High School Football Team in Georgia Have an Official Pastor?

Another public school with a Christian football team?!

The Freedom From Religion Foundation got word that Alexander High School’s football team in Douglasville is run by a coach who think it’s okay to have pre-game meals sponsored by a local church and allow the church’s pastor to lead the team in prayer before they take the field.

It is our information and understanding that Alexander High School’s football team has team meals before its games. We understand that these meals are “sponsored” by a local church, Pray’s Mill Baptist and that the church’s pastor, Ric Blazi, is allowed to give what our complainant describes as a “pseudo-sermon” at the end of the meal before asking everyone to bow their heads and participate in a prayer. Our complainant reports that there are non-believer athletes who are uncomfortable with this practice, but cannot declines to participate or leave because they risk banishment from the team. We also understand that Mr. Blazi is present at most practices at games.

A quick look at the team’s Varsity roster confirms that Blazi is the official Team Pastor: 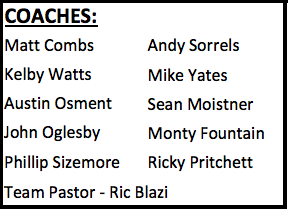 There’s just no reason for this. Students are welcome to pray on their own, but this is coercion no matter how you look at it. The administrators will undoubtedly say no student is forced to participate, but the pressure is there whether they like it or not. If you’re the one player who doesn’t want to take part, you risk being sidelined for the game for not being a team player or ostracized by your teammates.

This is the same school district, by the way, that was successfully sued by FFRF in 1989 after student Doug Jager was punished for not participating in “pregame prayers led by Christian ministers at high school football games.”

Now, the district risks making a similar mistake. The taxpayers, and ultimately the students, are the ones who will suffer if district officials choose to stand their ground.

May 28, 2014
A Message to Christians Who Love Their Guns
Next Post

May 28, 2014 Reps. Rush Holt (D-NJ) and Barbara Lee (D-CA) Will Also Speak at Atheist Group's Lobby Day Event
Browse Our Archives
What Are Your Thoughts?leave a comment