Franklin Graham Tells Us Who Will Be in Hell: Atheists, Murderers, and Pastors Who Don’t Condemn Homosexuality May 28, 2014 Hemant Mehta

Franklin Graham Tells Us Who Will Be in Hell: Atheists, Murderers, and Pastors Who Don’t Condemn Homosexuality

According to evangelical leader Franklin Graham at the Family Research Council sponsored Watchmen on the Wall National Briefing, we all know the kinds of people who will spend eternity in Hell:

Murderers. Atheists. Idolaters. And Christian pastors who don’t speak out against homosexuality and abortion. 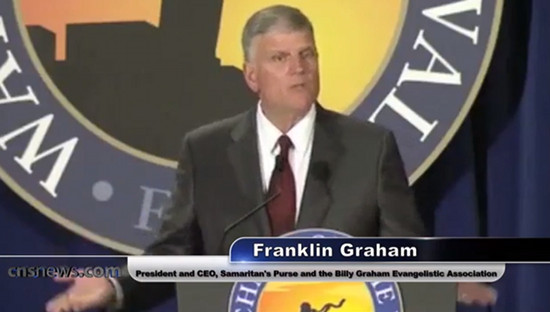 I would love to take offense at the fact that he included atheists on that list, but those are typical evangelical Christian beliefs. Nothing to see here. But pastors who don’t condemn the LGBT crowd?

“God hates cowards. And the cowards that the Lord is referring to are the men and women who know the truth but refuse to speak it.”

In his remarks at the dinner session, Graham spoke about the need for churches to speak out against abortion and homosexuality, declaring that “you’re not going to shut me up.”

“We have a responsibility to speak on the moral issues. Abortion, homosexuality, these are moral issues. This is a free country, you can do what you want to do but I want you to know it’s a sin against God. This is a sin,” said Graham.

He also said in the same speech that gay people, whom he “loves,” need to be warned that “it’s the flames of hell for you” if you keep doing the thing that God programmed you to do.

It’s like that verse in the Bible where Jesus told the gay man he was doomed to roast in hell for all eternity.

You know, if Franklin Graham and the people in that room are going to take up space in Heaven, Hell won’t be such a bad place after all. We get all the fun people and none of the Christian bigots. It’s a win-win for everyone.

May 28, 2014
After Decades of Giving a Religious Commencement Address, An Educator is Told He Can't Participate at Graduation
Next Post