Michael Peroutka believes the idea of evolution is anti-American. 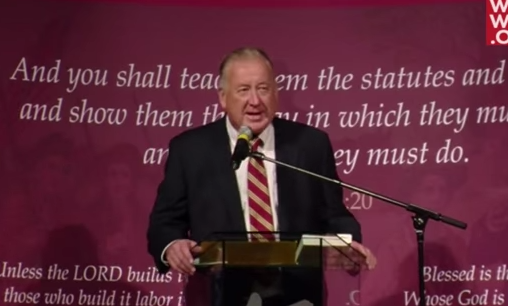 He believes it because the Declaration of Independence cites a “Creator.” And because he’s a Young Earth Creationist who doesn’t care about the facts.

… The promotion of evolution is an act of disloyalty to America, that’s what I’m saying… You either believe in Creation, by which you have rights that government is designed to protect, or you believe that all men are slime and that you have no rights at all.

It’s hardly a surprise, then, that someone so out of touch with reality would join forces with the Creation Museum’s Ken Ham.

Yesterday, Ham announced that Peroutka had donated the gift of an allosaur skeleton to the museum (the exhibit has a total estimated value of $1,500,000):

Michael Peroutka, who was on hand Friday morning for the private dedication of the allosaur exhibit, stated that this fossil “is a testimony to the creative power of God in designing dinosaurs, and that it also lends evidence to the truth of a worldwide catastrophic flooding of the earth in Noah’s time.” Appropriately, the allosaur has been placed in the museum’s large “Flood Geology” section.

[Creationist] Dr. [Andrew] Snelling added that Ebenezer most likely died in Noah’s Flood, over 4,300 years ago. In fleeing the rising waters, posits Dr. Snelling, Ebenezer was swept away in a debris flow and buried rapidly under massive amounts of sediment, preserving many of its bones.

Let’s get the obvious out of the way: Real geologists say that allosaurs lived approximately 140,000,000 to 150,000,000 years ago. Furthermore, a dinosaur skeleton proves the “truth” of the Great Flood as much as the the fettuccine in my pantry proves the truth of the Flying Spaghetti Monster.

If the allosaur really lived 4,300 years ago, then it lived alongside our own species… which brings to mind that old joke about how Creationists believe The Flintstones is a documentary.

At least the local newspaper wasn’t afraid to mention that:

Museum officials say the creature likely died in Noah’s flood, 4,300 years ago. The mainstream scientific community says that is, to put it bluntly, hogwash.

May 24, 2014
A Documentary About How the World Didn't End
Next Post