Dr. Tom Renfro nearly died from cancer 17 years ago. He took drugs. He had chemotherapy. And then… his tumors were gone. 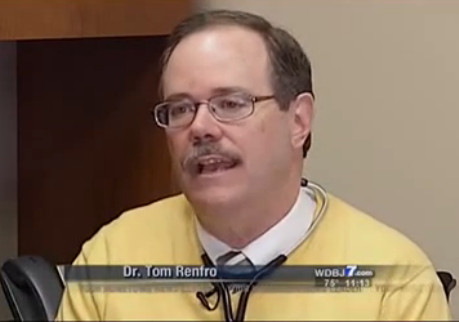 Time to thank the doct–wait, what?

Umm… Doctors? Drugs? Chemo? Something you haven’t figured out yet? In any case, God doesn’t poof away anyone’s tumors.

He was back in church just two weeks later.

“They carried me. I had to learn to walk again. I was very weak still, physically weak.” “I stood up in front of the congregation and I told them, I said, what you’re looking at, is what you’ve been praying for.” “You wanted a miracle of God and this is what He’s done. And I am here today because of the prayers that you prayed.“

Also, because of the doctors, drugs, and chemo.

“The church had 40 days of prayer,” Renfro’s sister in law, Tammy Sturgill said. Someone took an hour every day, around the clock for 40 days and prayed.”

“Thankfully, our community prayed wonderfully. I mean, they did an 80 day prayer stint but really they did an 18 month overall,” said Sid. “The whole community rallied, every denomination, different churches.“

Right… why do these doctors even bother going to medical school when all they need to do is learn to say the magic words?

I’m glad Renfro is alive, but if he died, you know exactly what everyone would be saying right now: It was God’s will.

If he had more faith in faith, wouldn’t he have skipped all the medical responses and gone straight to God? Isn’t it at least possible that the doctors’ work on him had something to do with his recovery? If God saved Renfro, why does He kill off so many of those other people with the same disease?

And why is WDBJ’s Nadia Singh not asking any of these questions?

This isn’t a story on some Christian site — it’s on a news station. What are they going to air next? A report on what Heaven is like?

If you want to understand how frustrating it is to be the rational ones in a country full of deluded people, just read the Facebook thread for this story. A few logical voices pop up, but they’re quickly drowned out by all those praising God.

(Thanks to Tamara for the link)

May 23, 2014
A Voice of Reason on Our Relationship with the Universe
Next Post

May 23, 2014 Humanist Weddings Are Hard to Come by, Even in Las Vegas
Browse Our Archives
What Are Your Thoughts?leave a comment