We know the IRS loves churches. We know this because on Pulpit Freedom Sunday back in 2012, more than 1,500 churches openly defied the law and endorsed a candidate for President.

The IRS sat back and did nothing about it. 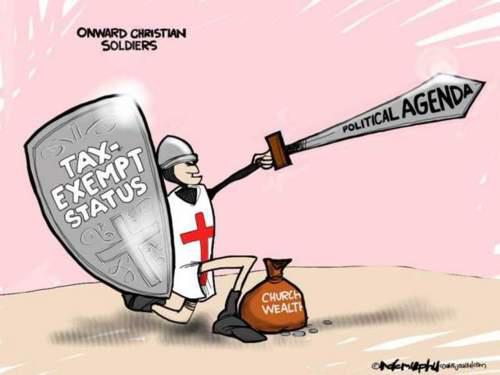 Why not? Bureaucracy. There was no one in the office who had the authority to initiate the audits, they said. And they were in no rush to find someone to fill that position, either.

In November of 2012, the Freedom From Religion Foundation sued the IRS over this. They said that Douglas Shulman, the IRS Commissioner, was violating the Establishment Clause of the Constitution by not doing his job and enforcing the “you can’t endorse a candidate from the pulpit” rule. (They also said Shulman violated their Equal Protection rights.)

In other words, if churches are taking in so much money, tax-free, they should not be allowed to break the law and endorse political candidates. It was the IRS’ job to make sure that happened, and even when the churches flaunted their violations of the law, the IRS pretended like nothing was happening.

A month later, American Atheists also sued the IRS, but for a completely different reason: They said Shulman was giving preferential treatment to churches and religious organizations.

Furthermore, churches don’t have to tell the IRS what they do with the money they take in. So are they doing things that actually benefit the public and, thus, warrant a tax-exemption? Who knows. Other non-profit groups, on the other hand, have to file that paperwork meticulously.

Churches also get other special benefits the rest of us don’t: Pastors, for example, can deduct the cost of mortgage payments and homeowners insurance from their taxable income. Churches don’t have to withhold income tax from salaries paid to pastors. There’s no limit to the size of these deductions, either. Considering how many pastors there are who live in multi-million dollar mansions, it’s pretty obvious a lot of churches take advantage of this rule.

Those tax deductions we’re not getting from the religious world cost our country an estimated $71,000,000,000 a year.

That, AA claims, is discrimination:

… American Atheists is forced to expend time and money making accurate annual filings with the IRS each year or risk losing tax-exempt status or being subject to other sanctions for non-compliance. Most religious organizations and churches are not.

It would violate the sincerely held belief system of American Atheists to seek classification as a “religious organization or church” from the IRS. It, therefore, files its informational return each year while enduring discriminatory treatment.

Thus, American Atheists is forced each year to disclose information about its employees, volunteers, and donors — members of the most hated minority in America today that is subjected to great prejudice and discrimination — whereas churches and many religious organizations need not make such disclosures.

That also prevented AA from getting donations larger than $5,000 because they would then have to disclose the donors’ names, something churches don’t have to do, giving churches a “fundraising advantage.”

The filing fees to retain 501(c)(3) status are expensive — something churches don’t have to pay but atheist groups must.

Atheist groups have to pay their staff more money since they can’t deduct anything for housing expenses like churches can.

AA was asking the Court to rule that all tax codes treating churches differently from other non-profit groups were unconstitutional.

On Monday, a Kentucky federal district court threw out the entire case arguing that American Atheists didn’t have proper standing and, furthermore, they didn’t suffer an injury or represent other taxpayers or a broader group of organizations. Judge William O. Bertelsman said that AA didn’t apply for the tax exemptions as religious organizations or churches, and so they were never rejected as they claimed to be, and so the law was never really violated.

It seems like the court is subtly asking AA to apply to the IRS for designation as a church so that if they get rejected, they can actually have the standing to sue. But AA has said they don’t want to do that because it would “violate [their] sincerely held belief system.”

Plus, it would just be weird.

It’s a disappointing defeat. It may be legally sound, but it still gives churches an upper hand that they really don’t deserve. All AA is asking for is transparency — that churches be treated the same way as other non-profits with the same level of public accountability. The churches can’t be trusted to do the right thing and the courts and legislators aren’t putting enough pressure on them. I’m just not sure where this issue goes from here. But Christians are breathing a sigh of relief that their special benefits aren’t about to be taken away.

(via Religious Clause. Large portions of this article were posted earlier. The title has been changed to better reflect the judge’s decision.)

May 22, 2014
Singer Toni Braxton Had an Abortion Many Years Ago, Thinks God Punished Her With an Autistic Son
Next Post