3 Tough Things About the First Year of Marriage That Aren’t Really Tough At All May 22, 2014 Hemant Mehta

In an article for the Christian website RELEVANT, Bronwyn Lea writes about the (lesser) difficulties you might come across during your first year of marriage: 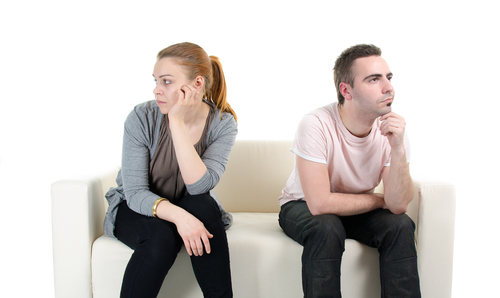 There was no particular sin or problem that made it hard. It wasn’t that we were mismatched. It was more just that it was painful to figure out the changes. The most honest thing we were able to say about that first year was that it was “a big adjustment.”

No surprise there. Living with someone else is a change for everyone. Lea goes on to explain some of the adjustments you have to make, like figuring out “alone time” versus “together time”:

And all the nonstop-simple decisions you have to make as a couple:

When should we eat dinner? What should we eat for dinner? Who will do what prep and cooking for dinner? How long after dinner is it acceptable to wait before doing the dishes? Should washed dishes be dried and put away at once, or left to drip dry until morning? None of these questions were particularly important, but it was much like the fatigue of a group of friends all trying to decide on a place to go for dinner and the conversation just goes and goes and goes because no one wants to decide for the group. We were tired.

And not being able to see your friends all the time:

I wanted to maintain those relationships and not be the friend-who-dropped-off-the-face-of-the-earth once she got married, but I couldn’t leave my new spouse alone at home three nights a week, nor could I always be inviting my girl friends to our house. They were my friends after all, and while they liked him they didn’t exactly want to bare their souls to my new hubby.

Look, I’m not saying marriage is easy or that I’m an expert at it. It’s not and I’m not. But there’s a simple way to work your way through many of these “tough things” before they ever become problems.

Live together before you get married.

That alone would give you the opportunity to work through so many of the smaller changes you’re about to encounter. You’ll figure out how to maintain your own identity even though you’re part of a couple, how to work through simple decisions, how to find time for your other friends, how to deal with your partner’s quirks, etc.

Lea knows that. She acknowledges that in the comments section before writing it off. She even wrote another article about that very idea — but dismissed cohabitation because, well, for no reason whatsoever.

Why is living together not even an option?

This is purity culture in a nutshell, this idea that you’re ruining something special if you experience it too early.

Some Christians love to claim that cohabitation leads to divorce or unhappy marriages — but they fail to understand that age and maturity has as much to do with those results as anything else.

Think about this: What kind of people live together before marriage? In many cases, it’s people who don’t have a lot of money and who are younger. Those are precisely the people more likely to get divorced in general. When you account for those other factors, cohabitation is no longer a cause for fear.

Better yet, maybe you live together before marriage and realize you’re not as good a match for each other as you thought you were — and you can break things off before they get even more serious. Better to cohabitate and separate than get married and divorced.

I’m not about to say marriage is easy. Every couple is different and so are their problems. But when the problems you’re complaining about are relatively easy to deal with before they snowball into something huge, why wouldn’t you even consider the obvious solution?

On a personal note, I’m so glad my wife and I decided to live together before getting married (we knew we were heading in that direction). It gave both of us a chance to know what we were getting into — and there have been relatively few surprises since the wedding. When people ask me what married life is like, my answer has typically been, “Pretty much the same as pre-married life,” and I mean that in a positive way. Cohabitation may not be for everybody, but it worked well for us.

May 22, 2014
Here's Why the Christian Right is Losing the Battle Against Gay Marriage
Next Post

May 22, 2014 Welsh Christian Party Demands a New National Flag, With a Cross Replacing the 'Devil-Inspired' Red Dragon
Browse Our Archives
What Are Your Thoughts?leave a comment