By now, you know that a judge in Pennsylvania struck down a ban against gay marriage today. It’s a wonderfully-written ruling worth reading in full, but what makes it especially great is that Judge John E. Jones III is a George-W-Bush–appointed, Rick-Santorum–approved Republican who may be best known to this site’s readers as the judge who pretty much single-handedly destroyed the Intelligent Design movement in 2005 with his decision in Kitzmiller v. Dover. 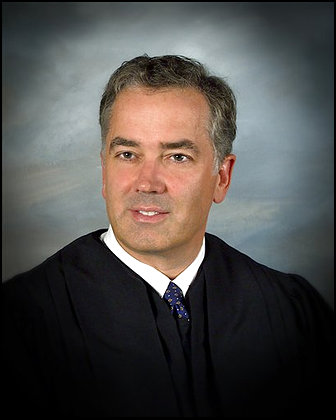 Since the Religious Right is undoubtedly going to criticize him as some activist judge with a liberal agenda, it’s worth taking a look at some of the statements he’s made to show that those labels don’t apply to him at all.

In 2008, Jones spoke at the World Humanist Congress in Washington, D.C. about precisely those criticisms against him and how it made him want to speak to crowds about the role of the judiciary:

It is known by many that in the aftermath of deciding the Kitzmiller v. Dover case, I took some incoming fire by such luminaries as Bill O’Reilly, who called me a fascist. The Rev. Pat Robertson indicated that “this was an arrogant federal judge making an absurd decision” and opined that the community at Dover would likely be vaporized in a natural disaster. Phyllis Schlafly said, “this was an unintelligent rant about intelligent design by a federal judge.” And the coup de grace was administered, I suppose, by Ann Coulter who devoted several pages of her book, Godless, to me. She said, among other things, “that we haven’t had a First Amendment scholar near the bench like this since President Bush nominated Harriet Miers to be on the Supreme Court,” so she didn’t much like Harriet Miers apparently either.

But it was Phyllis Schlafly, in her criticism of me, who posited that because George W. Bush was elected president with the help of evangelicals and he had appointed me as a federal judge, that in rendering my decision in the Kitzmiller v. Dover case I had “stuck a knife in the backs of those who brought me to the dance.” And of course, the necessary implication there is that federal judges need to get with the program, we need to please political benefactors, we need to take one for the team, where necessary, without any real regard for how we operate. And that was a common stripe in all of the criticisms by the punditry and it really drove me out of chambers and onto the speaking circuit. I knew by the time I decided the case that it had attracted attention, really not just across the United States but across the world, and I thought it was important to speak generally about some of these points.

He also said in an interview with PLoS Genetics that he never decides cases based on his personal beliefs, only what’s presented in front of him:

… I have to decide cases based on the facts that are before me. I can’t decide a case based on my own opinion, gleaned from outside the courtroom. That’s why I don’t engage in my own independent investigation…

… A judge could be an avowed creationist, but he’s got to rule based on the facts and the law. In that event, he’d have to hold his nose and do his duty as a judge. I am a person of faith. I’m certainly not an atheist or an agnostic and I see some divine force somewhere.…

But the best line of all may be this one:

When I take my last breath and they publish my obituary, the first line will say that I presided over the intelligent design trial. I can’t top this, I don’t think, and I’m fine with that, if this is what I’m remembered for. I’m proud of what I did. I thought I discharged my obligations and my duties well.

As much as I loved his 2005 decision, he topped himself today. And he did it, not because he had an agenda to push, but because the facts of the case left him no other choice.

May 20, 2014
Does This Child-Raping Imam Have the Right To Face His Accusers?
Next Post