Does This Child-Raping Imam Have the Right To Face His Accusers? May 20, 2014 Terry Firma

Does This Child-Raping Imam Have the Right To Face His Accusers?

Mohammad Masroor is the kind of conservative Muslim leader who normally wants to see women dress in burqas and niqabs.

Except when he rapes them, and when they subsequently testify against him in court.

Masroor, based in Detroit, says that his recent conviction on 15 counts of sexual assault against three young girls (his youngest victim was 10) is unfair because he didn’t get to face some of his accusers in court; they wore face-obscuring Islamic garments.

On May 2, a Wayne County jury found Mohammad Masroor, 51, guilty of 15 counts of criminal sexual conduct in 2000 against three female relatives who were 10, 12 and 13 years old at the time. His attorney maintains the imam didn’t get a fair trial because some of his witnesses testified wearing a niqab, an Islamic face veil that covers up a woman’s entire head except for a narrow slit that shows only her eyes. …

Prosecutors said Masroor used his influence as a religious leader to take advantage of the girls while he was tutoring them in Islamic studies. Eight victims testified in the case, all of them relatives. In Canada last year, he was acquitted of sexually assaulting five other relatives while he was imam of a mosque in Toronto.

“He would use his religious knowledge to manipulate these victims,” said Khalil Rahal, assistant prosecuting attorney for Wayne County, who handled the Detroit case. “He was put on a pedestal … as a respected imam.” Masroor exploited the conservative religious views of the girls to keep on abusing them, Rahal said. “He would say things to the victims like: ‘If it ever came out you weren’t a virgin … they would stone you or kill you. … Nobody in the world would believe you because of who I am.’”

… [b]orn in Bangladesh to a noted imam, … memorized the Quran by the age of 9, became an imam at 24, and immigrated to the U.S. on a religious workers visa.

Yes, that’s a thing. In the pursuit of an American visa, professional purveyors of piety have a leg up on non-believers. Don’t even get me started.

Before the trial started in April, [Masroor’s attorney Mitch] Foster asked the court to require any female testifying against Masroor not to wear the niqab. Foster cited the Sixth Amendment of the U.S. Constitution, which says in part that the accused [has] the right “to be confronted with the witnesses against him.”

If females wear a niqab, the accused is “denied the right to fully cross-examine and confront the witnesses,” Foster said he argued.

But prosecutors were concerned that

…requiring the women to show their faces was another way for Masroor “to re-victimize the victims,” because the victims feel [that] being looked at by a man — especially one who assaulted them — is hurtful. “This was his one last chance to undress them,” Rahal said.

Judge Michael Hathaway decided that the victims would be allowed to wear a niqab in court, and two of the women did.

Much as it pains me to side with a character as despicable as Masroor, I think a higher court just might overrule Hathaway’s niqab decision on appeal. 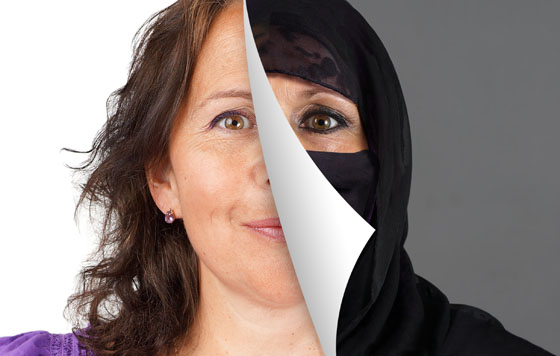 I see no reason why the religious should be accorded unique rights … that judges make up on the spot. These are rights to which the non-religious can lay no claim.

Being permitted to conceal one’s face on the witness stand sets a bad precedent — one that probably violates the confrontation clause of the Sixth Amendment and seems at odds with the Fourteenth Amendment, which guarantees equal protection under the law.

I sympathize with the victims, but in America, the justice system ought not pander to “modesty” zealots who, a bit implausibly, equate showing one’s face with appearing naked. If I were on a jury, I’d certainly value the chance to observe all witnesses and their facial expressions, the better to assess their candor and truthfulness.

The government and the judiciary have no business privileging one religion over another, or any religion over no religion. It ought to make no difference to the courts whether the witness (or the accused) wears a niqab, or whether she has strapped a colander to her face (as, say, a particularly prudish worshiper of the Flying Spaghetti Monster theoretically might).

In other words, if the law treats us all as a society of equals (as it should), judges ought to deem all face-obscuring shenanigans unacceptable, without regard to the religious or non-religious reason for the concealment.

(Bottom image via Shutterstock; thanks to Caroline for the link)