New Survey Says Being an Atheist is the Most Negative Trait for a Presidential Candidate May 19, 2014 Hemant Mehta

For decades now, Gallup has been asking voters about their dealbreakers when it comes to electing a President:

And every time, “atheist” has been at the bottom of the list. In 2012, there was cause for celebration simply because more than half of those surveyed said they wouldn’t hold atheism against a politician.

Yesterday, the Pew Research Center released the results of their own version of this question. They wanted to know which qualities would help and hurt potential 2016 presidential candidates.

They asked voters whether certain characteristics would make it more or less likely that a politician would get their votes. For example, if the candidate were a woman, 19% of those surveyed said they would be more inclined to vote for her while 9% said less, for a net positive of 10%.

So Pew ranked the characteristics from highest net positive traits (served in the military, was/is a governor) to the highest net negative (take a guess): 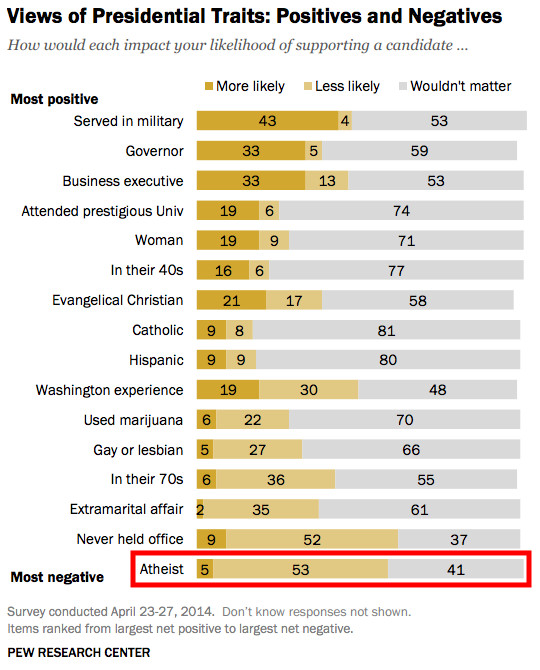 There we are, way at the bottom. 48% of voters, on the whole, say they would be less likely to vote for someone who was an atheist. Having an affair would hurt you less than admitting there’s no evidence for the existence of God. Someone who’s never held elected office would be at an advantage over someone who didn’t believe in fairy tales.

The one upside to that is that atheism was a more harmful trait seven years ago (63% of voters said in 2007 that they would be less likely to vote for an atheist, compared to 53% now), so the percentages are at least heading in the right direction, albeit very slowly…

But that’s not even the craziest result. It’s disappointing, for sure, but it’s not unexpected.

Are you kidding me?!

I’d like to say that’s a good thing. It means we’re aware that just being an atheist doesn’t automatically make someone a good candidate. It means we consider other factors in addition to someone’s religious label. It means we think more critically about candidates.

But the largest religious groups in the country don’t do that — and that, unfortunately, makes them a much more powerful voting bloc than us. They’ll blindly support candidates who spout Bible verses and speak Christianese — arguably over better candidates who don’t just resort to religious platitudes or who keep their beliefs to themselves.

There’s far more of them than us — and they are more likely to rally behind someone from their own tribe.

If there’s one silver lining to this, it’s that 64% of the religiously Unaffiliated say that a candidate’s atheism doesn’t matter to them. It’d be a more relevant number if there were more Unaffiliated Americans, but it’s still worth considering, Maybe it means atheist candidates running for office might as well come out of the closet. They already have an uphill battle, so why not just do some good and crack the glass ceiling before the election is over?

May 19, 2014 Rabbi Who Advocated Murder of Government Officials (and Encouraged His 6-Year-Old Son to Kill) Regrets His Words
Browse Our Archives
What Are Your Thoughts?leave a comment