You Don’t Have to Give Up Your Manners When You’re the Only Atheist in the Room May 17, 2014 Hemant Mehta 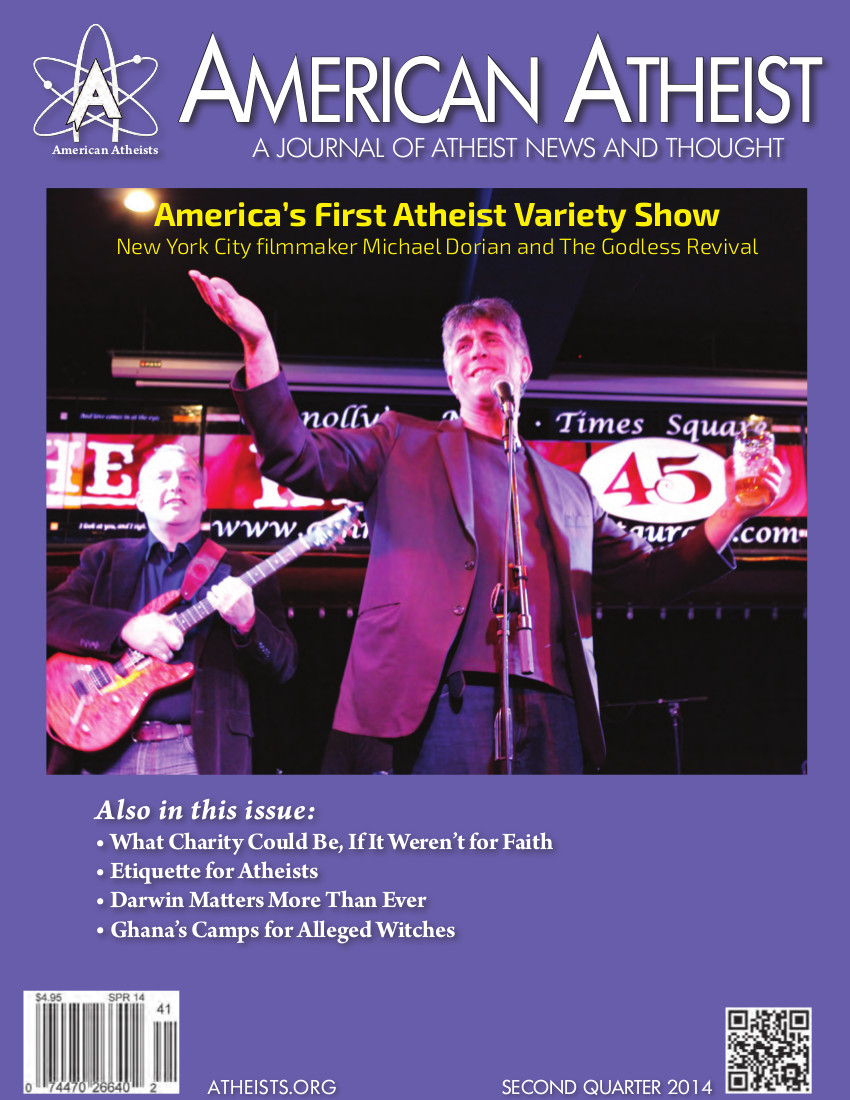 “Rule of etiquette the first — which hundreds of others merely paraphrase or explain or elaborate — is: Never do anything that is unpleasant to others.” — Emily Post, Etiquette

Few things seem, on the surface, more at cross-purposes than public Atheism and etiquette. If Emily is right — and I think she is — about good manners consisting primarily in doing everything you can to make life more pleasant for those around you, then merely being an Atheist in the first place is a shocking breach of decorum. What could make life more immediately unpleasant for your neighbor than steadfastly refusing to acknowledge the possibility of their theological whims? Is the choice, then, between being well-mannered but silent or uncouth but true-to-self? Put more bluntly, must Atheists always appear as clumsy, ill-bred bullies?

Of course not. (Though some of us do delight in our reputation for coarse disregard, as we consciously cultivate a punk sneer.) I’m supremely glad that we have people who are cut from that provocative cloth, because I believe they are absolutely necessary. But I admit to never being comfortable in that role. So, I’ve set about, with the great minds of historical etiquette to lean on, trying to craft an Atheism that is able to express itself while still obeying Emily’s First Law.

My basic principle is this: Never initiate a religiously contentious moment. If somebody else should drag you into one, you deserve to assert your existence as an Atheist, but only in proper proportion to the intimacy you have with that party. Let’s see how this would play out:

You are at a store, and the clerk wishes you “Merry Christmas” as he hands you the receipt. This is the most trifling of religious assumptions, and most of us are entirely fine with letting it pass. But let’s say you can’t. You just can’t. You’ve been wished Merry Christmas 99 times that day, and you are done with the bombardment of Jesus in the manger.

Keep in mind is that this person is an entire stranger to you, and your response should therefore be of minimum complexity and zero tendentiousness. “Happy Holidays” is fine, but it doesn’t really assert much of anything. My stand-by is, “Ah, and a happy season to you!” The “Ah” expresses a recognition that they have gone out of their way to wish you well, and that you appreciate it. The remainder of the message expresses returned good will, but with the slightest whiff of secular suggestion. It’s distinctive but not accusatory. If the clerk is particularly perceptive, you’ve done something toward making them realize that there are entirely decent, understated people out there who aren’t Christian. And if he’s not? Well, you did what you could within the realm of pleasantness, and that’s all that can be asked.

Be they Jehovah’s Witnesses, Mormons, or something else utterly, there is no doubt that they have come asking to start a religious conversation. You will not change their mind with a virtuosic display of logic or a burst of vitriolic indignation, but you may give them pause with some honest pleasantness. “I’m terribly sorry, but I am an Atheist, you see, so I don’t think we have much common ground as to religious discussion. But would you like to come in for a bit and have some tea (if it’s cold out) or ice water (if it’s hot) before moving on to the rest of the neighborhood?” usually works rather well. The offer is generally rejected, but the unexpected civility noted.

With those who actually take me up, given the understanding that we won’t talk about pesky religious things, I chat about everyday life, learn something of their troubles and hopes, and they some of mine, and we part quite cordially, never to meet again. From a tactical standpoint, I’ve demonstrated that one can be an Atheist and also quite considerate and generally well-adjusted, and that always works out well for us.

Most of the existing etiquette book guides for large dinner gatherings work pretty well here. In the face of unpleasantness, a good host understands that an unpleasant response, while personally gratifying, would make a guest uncomfortable, and, as such, would be a failure of hosting. The fact is that, for every person who eggs you on to turn a discussion inelegant, there are 50 others quietly hoping that you’ll find your better instincts.

A proper response to unjust and insulting online criticism is silence. Politeness will be deliberately misconstrued as hauteur, and anything less is beneath the dignity of a responsible person.

If the criticism has a nugget of merit, however coarsely stated, it deserves a response. If their point is one you want acknowledge, don’t accuse them of ignorance. Instead, request an elaboration, such as, “I have to admit to finding this step rather worrisome. Could you perhaps flesh it out a bit for us?”

If the point isn’t one you want terribly much to go into, a subtle diversion is in order. I like books, so that’s usually where I go: “I notice you mention X. What are your favorite reads on the subject?” expresses the appropriate amount of recognition and good intent, while at the same time effectively ending the discussion before it gets tedious.

You are volunteering, and somebody you just helped fulsomely praises you with, “Bless you for your time” or “It’s been a real blessing to have you” or more embarrassingly still, “May God bless you for what you’ve done here.” Their eyes beam with genuine warmth and human regard, and you are truly moved. You have to choose whether to thank them in return and move on, or find a gentle way of expressing your own perspective.

You probably have some acquaintance with these people, so your response can be rather more elaborate than in Situation 1, which assumes no future contact. Again, there is nothing wrong with taking the praise and letting it be. Although most of us actually do this, there is no reason why you can’t be both honest and gracious: “Well, thank you very much, and as a grizzled old Atheist, I can tell you, I don’t get blessed nearly enough, so I certainly appreciate it!” There is a bit of self-deprecation, a sliver of a joke, and never the slightest suggestion that you don’t deeply appreciate their sentiment.

I’ve never liked, “Thank you, although to tell the truth, I’m an Atheist,” which is touted as a good stock response. It ends too abruptly, and doesn’t offer a path back to normal conversation that all awkward but necessary comments must have. Also, the words “but” and “although” should simply never be used in an expression of thanks, no matter what the situation.

Situation 5: Grace Before Meals and Other Unavoidable Religious Ceremonies

You have been asked to lead grace at a family event, perhaps by a family member who doesn’t yet know that you’re an Atheist or by one who does and likes watching you squirm uncomfortably.

I can think of no condition, short of it being your dying grandmother’s last wish, under which acceptance is the right course of action. Decline politely and indicate somebody who would do better in your stead. “Thank you all terribly much. I think grace would mean so much more coming from somebody slightly religious. Plus, you’ll all agree that we haven’t heard nearly enough from Ted this evening. Go on, Ted!”

During the grace, the same rule holds as for any religious ceremony you find yourself attending: You need not participate, but you must not interfere. I don’t care how ridiculous or disgusting the event is. If you have been invited to it, your behavior reflects upon your host, so you will keep your grimaces, eye-rolls, and mutterings to yourself. If you have invited yourself to the event, then you are your own host, and as so, should be doubly courteous.

At the same time, you should feel no compulsion to join the rituals. A gracious host wouldn’t include you in the first place if participation were mandatory, because that would reflect badly on them. And no good friend would expect you to betray your principles to make up for their own lack of invitational foresight.

And while we’re on the subject, a word about hats in church. I wear hats more or less everywhere, and only feel compelled to remove them at funerals, at events where their bulk blocks the view of people behind me, and during the national anthems of countries I like. As such, I regularly wear them in churches and occasionally get scolded for it. I usually respond with some variation of, “Mistrust all organizations that attempt to remove you from your headwear, especially when it is the only thing interesting about you.” It’s usually interpreted as a benign statement of foppishness rather than an act of irreligious contempt, and the bomb is defused. If you need to err, err on the side that makes you look a little vain and silly rather than one of righteous pride, and you can’t go wrong.

I’m sure this all sounds incredibly wishy-washy to many Atheists. Those who relish debate with hapless but cocky rubes might think I’m criticizing their approach to life as an Atheist, but I’m not. I aim to find a livable compromise for the rest of us less-meteoric types. We want to be recognized for what we are without making our existence a standing accusation against the world. This can be done when you are willing to be understated instead of indignant, and self-effacing when you could be caustic. After millennia of persecution, we have rightfully earned caustic indignation as our hard-won due. But sometimes a prize rejected brings rewards greater still, and reducing the overall animosity toward each other certainly counts as one such.

Dale DeBakcsy is a regular contributor to American Atheist as well as The Freethinker and The New Humanist. He is also the author and artist of the biographical series “Women In Science” at MadArtLab.com.

May 17, 2014
Christian Publisher Forced to Resign from NRB After Releasing Book Reconciling Faith and Homosexuality
Next Post