New Study Shows That Americans Lie About How Often They Really Go to Church May 16, 2014 Hemant Mehta

In a study to be unveiled just hours from now, brilliantly titled “I Know What You Did Last Sunday,” the Public Religion Research Institute shows that Americans are lying their asses off when it comes to admitting how often they go to church.

How do they know? Researchers conducted two types of surveys — one over the phone and one online — in which they asked the same questions about going to church and belief in God. When participants had to provide answers to a human being over the phone, they were much more likely to inflate their church attendance numbers. And when they’re in front of a computer, they’re more likely to admit that they rarely, if ever, go to church. 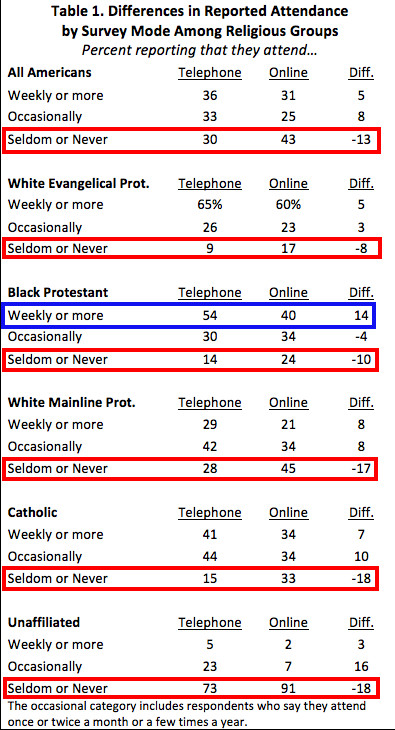 Catholics are less than half as likely to report seldom or never attending religious services when responding to a telephone versus online survey (15% vs. 33%). Among white evangelical Protestants, the differences between modes are less stark: 9% report they seldom or never attend religious services when speaking with a live interviewer, compared to 17% who report the same in a self-administered survey. Among black Protestants, the differences between modes are also not as glaring. Only 14% of black Protestants report seldom or never attending on a telephone survey, compared to nearly one-quarter (24%) on the online survey.

It’s not just the religious who are more willing to admit they don’t go to church on an online survey. Even the religiously unaffiliated — a group that includes atheists — can’t bring themselves to say they never attend church. (73% said they don’t attend church over the phone compared to 91% online).

The disparity doesn’t just exist with church attendance. Even when you look at that unaffiliated group, there are marked differences between their (our) answers on questions about God and the importance of religion: 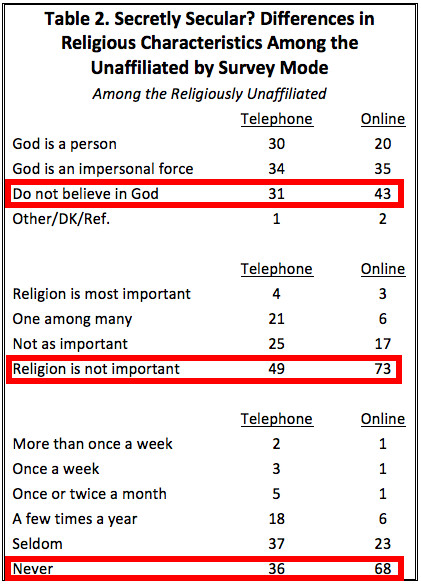 In one of the more surprising revelations in the study, it turns out the religiously unaffiliated are much more religious than we imagined. Even at best, fewer than half of them (us) don’t believe in a God. Another reason “Unaffiliated” is an awful catch-all term if you’re trying to describe atheists.

So what’s going on here?

While there’s variation among different religious and non-religious groups, the fact remains that Americans are weary of admitting to another person — even a stranger — that we don’t attend church. You want people to think of you as a good person, and one way to do that in our society is by saying you go to church. Even religious people who presumably believe “Thou shalt not bear false witness” will happily lie when it comes to their churchgoing. Not many people will honestly admit to someone that they skip church on Sunday or don’t give a damn about God.

But when you remove that human connection, the truth comes pouring out…

As I’ve suspected for a long time, this study supports the notion that the reported percentage of people who don’t believe in God is really much, much lower than it should be.

It’s also another piece of evidence as to how the Internet is where religion comes to die. It’s a lot easier to have honest discussions about faith and your religious beliefs behind the filter of a computer screen and (in some cases) the veil of anonymity.

Maybe if more people were honest about why they don’t go to church — if they said out loud that they don’t agree with their pastors or that they have better things to do with their time than listen to fables for an hour — it would encourage even more people to stop lying about their (un)godly habits.

If I were a pastor, this study would freak me out. It turns out the country is a lot less religious than we thought. We’re just afraid to admit it.

May 17, 2014 Was the Canceled TV Show Hosted by Evangelical Brothers Too Christian for Cable?
Browse Our Archives
What Are Your Thoughts?leave a comment