Egyptian TV Host Who Once Removed Hijab in Front of Muslim Cleric Kicks Skeptic Out of Studio for Doubting the Koran May 16, 2014 Hemant Mehta

It was a little over a year ago when I first heard of Egyptian TV host Riham Said. She had invited a fundamentalist Muslim cleric Sheikh Youssef el-Badri onto her show and shocked him by removing her hijab during the interview. He flipped out, but his hypocrisy was exposed since he can be seen speaking with her, sans hijab, without a problem before the show begins. 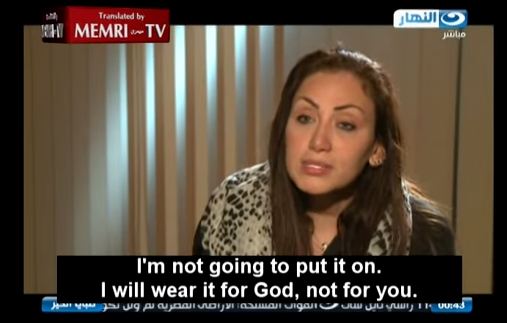 She was a hero to so many of us who watched that video.

Check out an interview Said just did with Salafist-turned-skeptic “Dr. Noha.” Said can’t handle the fact that Noha — who wears a hijab only to protect her identity — is questioning the truth of the Koran. Said even admits that she wants to see even the worst aspects of Sharia Law, like chopping the hands off of thiefs, implemented everywhere because “if we implement Islam in everything, no [bad] things will happen”: 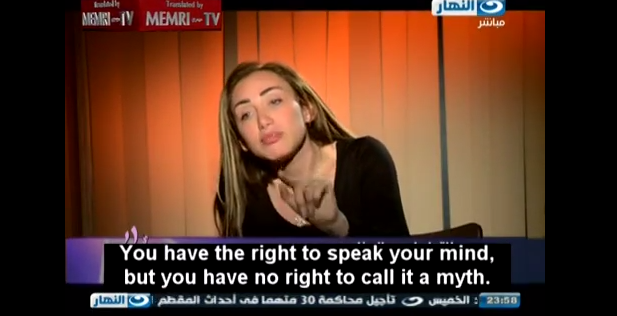 Said: I say that the Prophet Muhammad is Allah’s messenger!

Said: I believe in every single word and letter of the Koran.

Noha: OK, but you are different [from the Islamists].

Said: How am I different?

Noha: Do you support chopping off a thief’s hand?

Noha: Honestly, this is inhumane.

Said: A thief’s hand should be cut off, and an adulteress should be stoned to death.

Noha: This is really inhumane.

Said: If we implement Islam in everything, no [bad] things will happen.

Noha: How can you say that? Why do you defend myths?

Said: You have the right to speak your mind, but you have no right to call it a myth.

After rebutting all of the host’s faulty ideas — and there are a lot of them — Noha is eventually told to leave the studio because of her heresy.

It’s frightening to think how much respect I had for Said before watching that clip.

May 16, 2014 The Unbelievers, Starring Lawrence Krauss and Richard Dawkins, Now Available to Watch Online
Browse Our Archives
What Are Your Thoughts?leave a comment