Any Law May Be Broken With Impunity By People of Faith, Implies GOP Senate Candidate May 15, 2014 Terry Firma

Any Law May Be Broken With Impunity By People of Faith, Implies GOP Senate Candidate

On Tuesday night, Republican Ben Sasse of Nebraska won his party’s nomination to the Senate, in part on the strength of his (you’ll never guess…) religious convictions. It doesn’t take more than ten seconds to assess what kind of candidate Sasse is. His website says, about religious freedom,

We live in a country where the Little Sisters of the Poor, an order of Catholic nuns, must sue the government in order to continue caring for the sick and elderly poor. That’s outrageous. 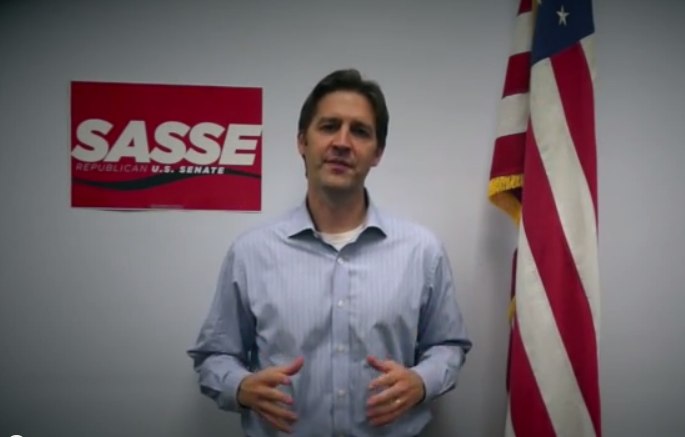 It’s as disingenuous and dishonest a framing of the issue as you’ll come across. Under the Affordable Care Act, religious groups do not have to provide contraception to their employees, but in that case, they’re asked to sign a form stating their objections. This then compels the insurer (or an outside health-plan administrator) to provide birth-control coverage, wholly separate from the religious organization.

Exactly nothing about that rule prevents the Little Sisters from “caring for the sick and elderly poor.” The nuns’ absurd insistence that they cannot in good conscience supply the form is akin to, in the words of the U.S. Solicitor General,

“… a Seventh Day Adventist [claiming he] could not be obligated to state that he had a religious objection to working on Saturdays before being relieved of his shift.”

But Sasse has another whopper up his sleeve:

Ben Sasse believes that our right to the free exercise of religion is co-equal to our right to life. This is not a negotiable issue. Government cannot force citizens to violate their religious beliefs under any circumstances. He will fight for the right of all Americans to act in accordance with their conscience.

Really? “Under any circumstances“? Is Sasse saying that any law may be broken as long as the offense or crime is inspired by a heartfelt religious conviction?

What if an employer believes, as many surely do, that since the husband is the head of the household, the man ought to take care of his family — and therefore health benefits may be refused to married women?

Think that’s far-fetched? It actually happened in the 1980s, when the California-based Fremont Christian School claimed the right to tell its female employees who wanted healthcare coverage to buzz off (in the name of Jesus, I guess). The courts had to intervene.

As Ian Millhiser and Josh Israel point out,

Under Sasse’s preferred rule, where “government cannot force citizens to violate their religious beliefs under any circumstances,” racists, sexists and homophobes who claim a religious justification for bigotry would be immune from anti-discrimination law. …

Indeed, under Sasse’s formulation, a person who believes that they violate their religious beliefs if they are late to church could ignore the speed limit, traffic lights, and stop signs if obeying traffic laws would cause them to miss just one minute of their church’s Sunday service.

But that’s just for starters.

A few especially nutty Christians may feel emboldened to slay adulterers and execute those who work on the Sabbath, in accordance with their conscience — because that’s what the Bible commands. (I don’t consider this a likely outcome, although we could certainly see violence against abortion clinics increasing if Sasse gets his way.)

Also, radical Muslims could easily take the directive about the primacy of their religious conscience as a license to commit honor killings and other stunning evil.

Sasse’s view that government cannot and may not force people to go against their faith is the stuff of two-bit theocracies.

Considering that the man is all but certain to win a Senate slot this fall, we’ll be hearing more from him, I suppose. Let’s hope that he’ll soften his sociopathic-Christianist tune once he’s in office — and discovers that that there’s this pesky thing called the Constitution that he and his fellow freshmen are up against.

May 15, 2014
Biblical Language Taken Out of Bill to Make the Wooly Mammoth South Carolina's Official State Fossil
Next Post