A Film About Atheism in Poland, 325 Years After a Soldier Was Executed for the “Crime” of Godlessness May 15, 2014 Hemant Mehta

A Film About Atheism in Poland, 325 Years After a Soldier Was Executed for the “Crime” of Godlessness

325 years ago, in 1689, Casimir Liszinski (a.k.a. Kazimierz Łyszczyński), a Polish soldier, was executed for the “crime” of atheism. 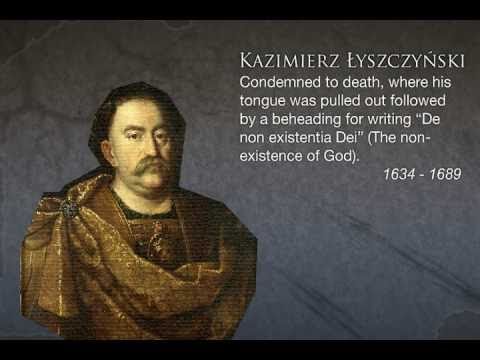 Last year, Polish filmmaker Zenon Kalafaticz made an English-language documentary about how atheism fares in the country more than three centuries after Liszinski’s death, and now he’s back with a new film about the topic. It’s called 325 Years After…:

I haven’t had a chance to watch the whole thing, but if you moments stand out, please leave a timestamp and summary in the comments!

May 15, 2014 President Ronald Reagan's Son Says in TV Ad That He's a "Lifelong Atheist" and "Not Afraid of Burning in Hell"
Browse Our Archives
What Are Your Thoughts?leave a comment