My Christian Education Curriculum Taught Me Not to Befriend Atheists May 14, 2014 Hemant Mehta

My Christian Education Curriculum Taught Me Not to Befriend Atheists

This is a guest post written by Jonny Scaramanga.

Earlier this year, I wrote an article for New Statesman in which I claimed that my Christian fundamentalist school had taught me not to be friends with unbelievers.

I wrote that “I learned to view non-Christians with a mixture of fear and contempt.” In response, I received an angry and ungrammatical letter from the UK distributor of Accelerated Christian Education (ACE), which said:

Mr Scaramanga refers to the so called alienation from the outside world, due to the indoctrination he alleges he received… The fact that so many have graduated from ACE schools unscarred would perhaps suggest that Mr Scaramanga‘s experience has more to do with his own personal circumstances, rather than the ACE system.

So he’s suggesting I’m lying. In fact, I didn’t go nearly far enough in showing how demonized unbelievers are by the ACE system.

Now I’m going to show you.

ACE’s chief weapon is its English lessons. Almost all English instruction in ACE is in the form of traditional grammar exercises — diagramming sentences, identifying subjects and objects, and learning parts of speech. Never mind that study after study have failed to find any evidence that this improves students’ writing, and never mind that we have known since at least the 1950s that ACE’s understanding of grammar is unscientific and not how language works in practice. There are plenty of credible English educators who still support grammar instruction, but none of them recommend doing it ACE’s way. ACE doesn’t care about that. Grammar teaching using isolated sentences is traditional. And traditional, to fundamentalists, is best.

Teaching grammar this way requires thousands of individual sentences for students to parse, and this suits ACE perfectly because it makes every page an opportunity for fundamentalist propaganda. The sentences tell stories of missionaries and Christian heroes, and they teach good Christian children how to behave. A lot of these sentences are about who you should and should not befriend.

In a section called “How Can I Be Happy?” students have to underline the verbs. Along the way, they learn that the way to be happy is to avoid hanging out with sinners: 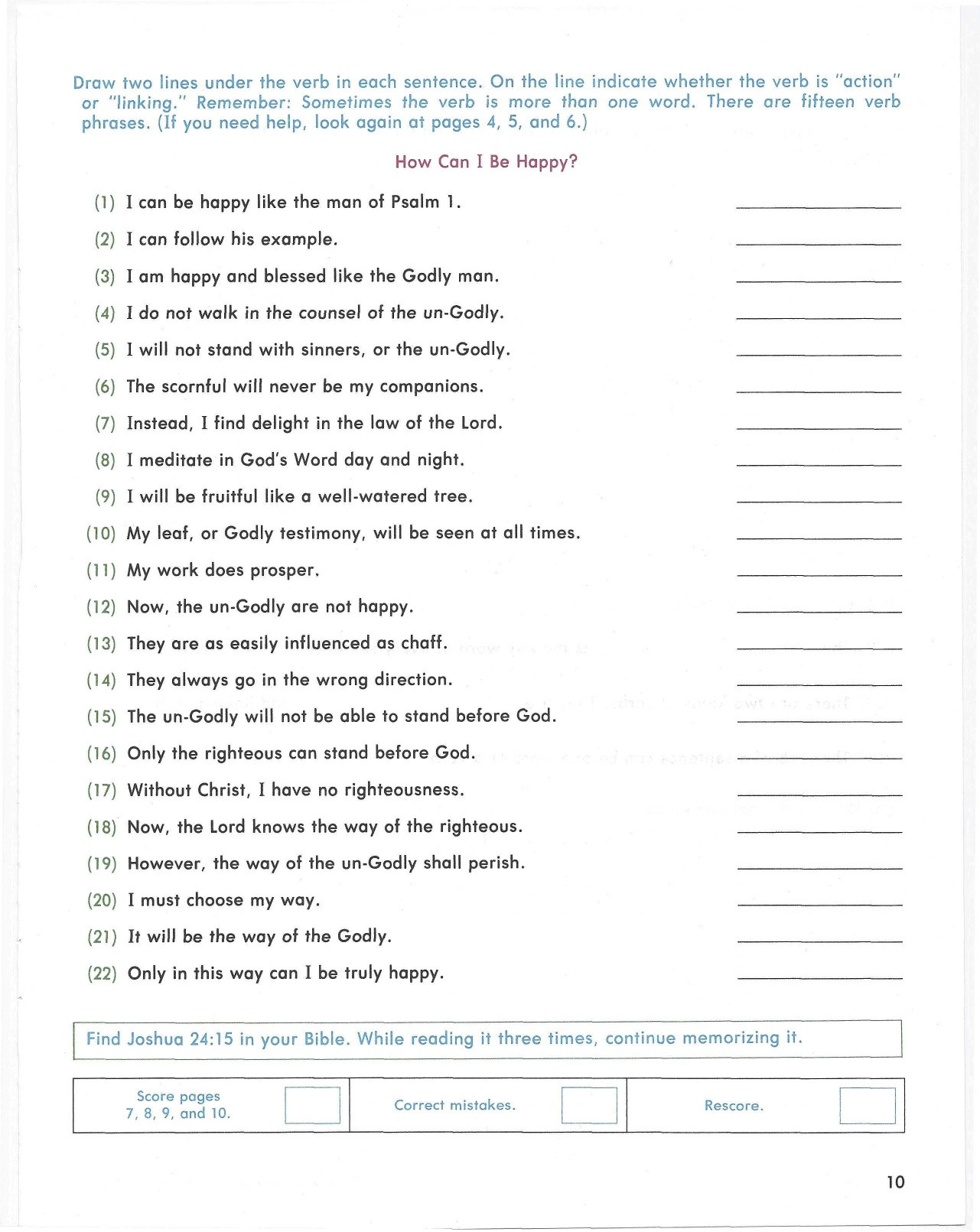 I am happy and blessed like the Godly man.

I do not walk in the counsel of the un-Godly.

I will not stand with sinners, or the un-Godly.

The scornful will never be my companions. 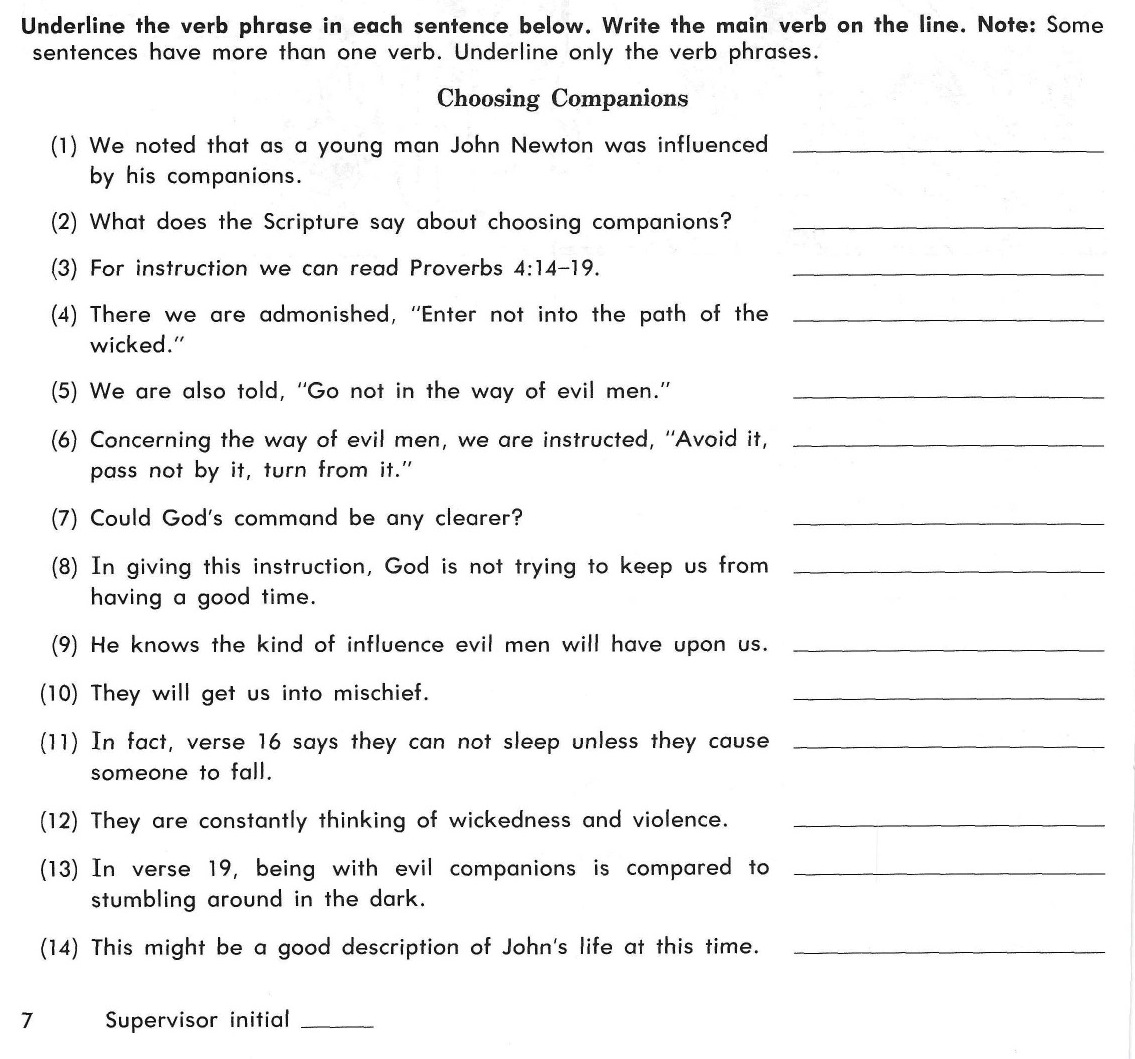 What does the Scripture say about choosing companions?

There we are admonished, “Enter not into the path of the wicked.”

Could God’s command be any clearer?

He knows the kind of influence evil men will have upon us.

They will get us into mischief.

In fact, verse 16 says they can not sleep unless they cause someone to fall.

These are not isolated instances. I’ve found dozens of instances where students parse sentences like “I will not spend time with people of unGodly [sic] character” and “My friends will be faithful Christians.” If anyone from ACE wants to question me on this again, I’ll be happy to upload more of them. And that’s before we discuss what they say about atheists.

English books from the 9th grade onward also contain sections called “Wisdom Inserts,” which are comic books used to inculcate Christian values. In these, again, students learn repeatedly that hanging out with non-Christians is wrong. This is said explicitly, but it’s also illustrated by the only two non-Christian characters, Ronny Vain and Susie Selfwill, both of whom are complete scumbags.

All these warnings about avoiding hanging out with “evil men” might not be so bad if ACE’s definition of evil were more reasonable. But the text makes clear that, without Jesus, everyone is incapable of being good, or even thinking rationally.

In the UK, independent schools standards require schools to teach “mutual respect and tolerance of those with different faiths and beliefs.” I don’t see how any school using ACE curriculum can claim to do that, unless the staff are taking the kids aside every day and reminding them that their books are full of lies and nonsense.

In the USA, there are thousands of schools like this, and these attitudes help to explain why political compromise with the Christian Right is so hard to achieve.

Jonny Scaramanga is a PhD student at the Institute of Education, London. He blogs at Leaving Fundamentalism.

May 14, 2014
Dillsboro Mayor Will Begin Board Meetings with Christian Prayer Since "We Ain’t Got Nothing but Baptists in Town"
Next Post