Think about “the end of Europe.” Do you suppose it is more likely that such a thing will be brought on by military aggression à la Russia’s de facto annexation of Ukraine, or by the TV appearance of a bearded singer performing in drag?

Victory for Austria’s bearded transvestite Conchita Wurst at the Eurovision Song Contest prompted an outpouring of anti-gay anger from Russian politicians and stars on Sunday. …

“There’s no limit to our outrage. It’s the end of Europe. It has turned wild. They don’t have men and women any more. They have ‘it’,” nationalist politician Vladimir Zhirinovsky told Rossiya-1 state television. 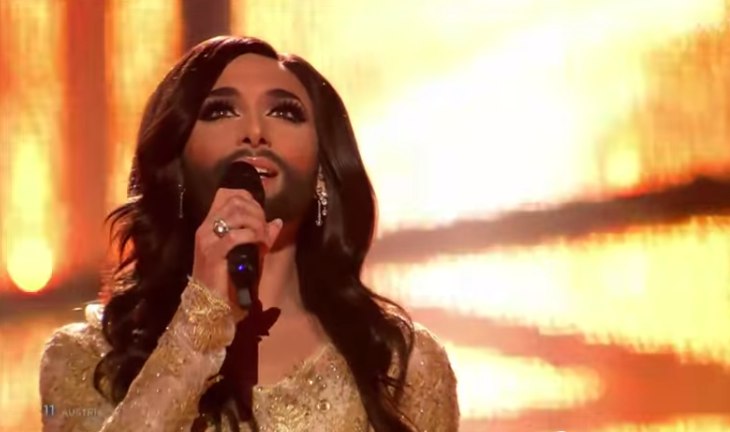 In case you’re not familiar with the Eurovision Song Contest, it’s an annual sing-off in which countries compete for the  best song and overall presentation. Each country’s jury awards points to all contestants but its own. It has been a famously ridiculous entertainment extravaganza for decades, a large percentage of viewers tuning in with a kind of tongue-in-cheek appreciation for the inherent campiness and gaudiness of the event.

One measure of how nutso the Eurovision Song Contest is: Israel, which has of course never been a part of Europe, is a frequent participant, while Turkey, which at least is partially located on European soil, is not.

“Fifty years ago the Soviet army occupied Austria. We made a mistake in freeing Austria. We should have stayed,” added the leader of the Liberal Democratic Party, known for his outrageous statements.

Good to know that in terms of hateful invective, American politicians and pundits have nothing on their Russian counterparts.

By the way, it probably didn’t help that Russia’s entry, the Tolmachevy Sisters, only came in at number seven.

May 13, 2014
After Losing the Massachusetts Pledge Case, Would the Atheist Side Have Done Anything Differently?
Next Post

May 13, 2014 Catholic Priest Tells Schoolchildren to Thank Their Mothers for Not Aborting Them
Browse Our Archives
What Are Your Thoughts?leave a comment