On Friday, students at MIT received an email letting them know that their graduation ceremonies would no longer have a religious invocation: 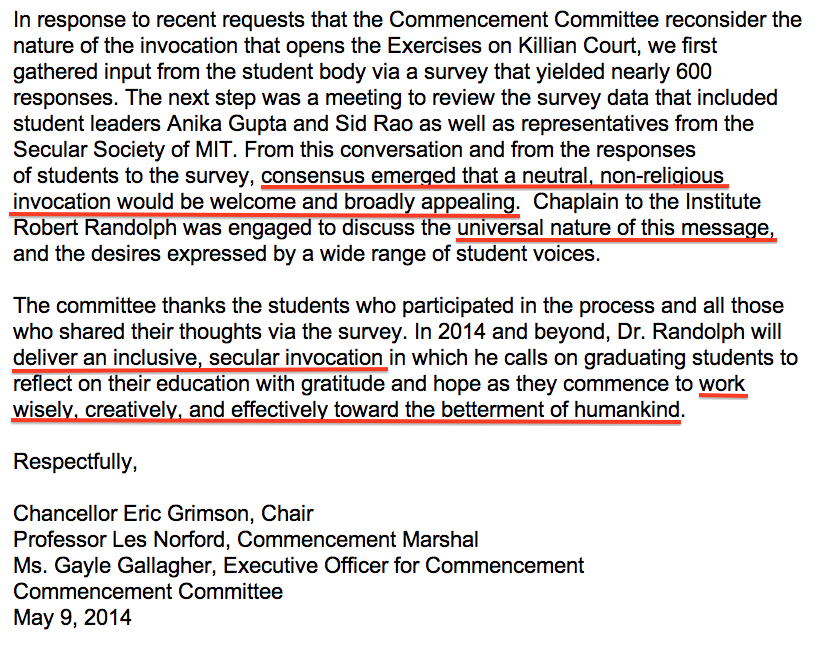 In response to recent requests that the Commencement Committee reconsider the nature of the invocation that opens the Exercises on Killian Court, we first gathered input from the student body via a survey that yielded nearly 600 responses. The next step was a meeting to review the survey data that included student leaders Anika Gupta and Sid Rao as well as representatives from the Secular Society of MIT. From this conversation and from the responses of students to the survey, consensus emerged that a neutral, non-religious invocation would be welcome and broadly appealing. Chaplain to the Institute Robert Randolph was engaged to discuss the universal nature of this message, and the desires expressed by a wide range of student voices.

The committee thanks the students who participated in the process and all those who shared their thoughts via the survey. In 2014 and beyond, Dr. Randolph will deliver an inclusive, secular invocation in which he calls on graduating students to reflect on their education with gratitude and hope as they commence to work wisely, creatively, and effectively toward the betterment of humankind.

Maybe your first reaction was like mine: MIT had religious invocations?! Yep. Many times over.

Last month, former president of the Secular Society of MIT, Aaron Scheinberg, wrote a compelling case in The Tech for why the invocations should become secular:

A graduation prayer is an exclusive ceremony directed toward those who believe in a god — some 40 percent of the student body, according to the 2012 survey by The Tech (although about 20 percent stated neither belief nor lack thereof). The rest of graduation is broadly accessible and intended to have meaning for all students.

If the administration wants to accommodate everyone, it should minimize exclusion, not average presumed personal preferences. Simply not mentioning God would exclude no one. Choosing neutrality would just be like all the other days when MIT doesn’t endorse a religion. If religious students would like an additional ceremony to celebrate graduation in a distinctly theistic way, that can happen separately. The main ceremony, however, is a banner of our entire community’s values. Let us not so needlessly inflict hypocrisy on the Institute’s dedication to inclusivity.

After that piece was published, the Undergraduate Association send out a survey to students to find out what the response on campus would be if they changed the invocation to a secular one and, as the email said, the response was a resounding “Meh, whatever.”

And just like that, the invocations have changed! As Sebastian Garza, the current Secular Society president, told me via email, “The consensus ended up being that it was not right to give preferential treatment to those of particular religions when the entire class’s hard work and achievements are being celebrated.”

It’s never easy to change tradition, especially with religion, but the MIT secular students led the way for this revision and all the students will benefit from it. Very impressive work all around.

May 13, 2014
Boone County (Kentucky) Students Will Receive Book About Atheism on the Last Day of School... Thanks, Christians!
Next Post