On Mother’s Day, Christine Weick, a born-again Christian protester against gay marriage, stood at a busy intersection in Grandville, Michigan, and displayed a sign that read: “Thank your mom today for not being gay.”

Soon, counter-protesters showed up with competing signs, which read “Thank your mom if you’re not a bigot,” “Fuck her,” and “But two moms can be fabulous!”

… a woman named Jessica Prince approached Weick and threw a slushie at her. 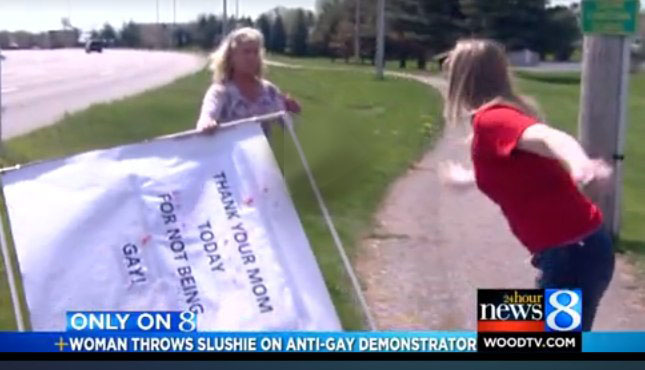 That’s not just piss-poor strategy; it’s not just juvenile; and it’s not just a petty act that makes the pro-equal-rights crowd (of which I’m a long-standing member) look bad.

It’s a criminal attack. Simple battery, to be precise.

Battery in Michigan is the intentional infliction of violence or force against another person, such as punching another person or hitting someone with an object. (Mich. Stat. Ann. §750.81.)

For the tort of battery, Prince could go to jail for 93 days, or be fined $500, or both. A judge might also slap her with an additional $800 fine for littering.

In the video, she can twice be heard asserting to Weick “I didn’t touch you,” but no touching is required for battery (otherwise people would be free to pelt each other with all manner of objects, which they’re clearly not).

I have to say that it also bugs me that Prince doesn’t even own what she just did, asking the news crew

“Could you leave the slushie part out? I don’t want to go to jail.”

Maybe she should have thought of that earlier.

It’s unclear whether Weick has pressed charges, but I’d have to support her if she did. Yeah, I don’t particularly like the message on her sign either, but the First Amendment doesn’t just apply to speech that we agree with. On the contrary.

Prince’s response is a lot more disturbing than anything Weick put on her sign. If you disagree with that, ask yourself if you’d feel the same way if Weick had been throwing things at pro-gay protesters.

(Thanks to attorney Marc Randazza for the legal information)

May 13, 2014
Citizenship Ceremony Forced to Change Venues After Carteret (New Jersey) Mayor Insists on Including Prayer
Next Post

May 13, 2014 College Atheists Push Back Against Hateful Christian Preacher in Very Clever Ways
Browse Our Archives
What Are Your Thoughts?leave a comment