This Christian Group Believes Atheists Who Defend the First Amendment Are Violating Their Rights May 9, 2014 Hemant Mehta

In an interview with the “Freedom From Atheism Foundation,” Mike Dobbins spoke with two of the administrators of the Christian Facebook page for “victims of militant atheism.”

Check out how Dr. Jim Ryan complains about the Freedom From Religion Foundation:

… The Freedom from Religion Foundation is an organization focused on restricting religious freedom in our society by using lawsuits to intimidate and bully those who express their religious views in public. Just a few of their lawsuits include trying to restrict the freedom to pray, the freedom of speech of teachers, the freedom of speech of students, and the freedom to honor our war veterans. They are using the legal system to silence and remove any expression of religion in public. They are fine with any form of free speech, unless it is religious. Clearly, they are only in favor of free speech when it agrees with their views and try to restrict those views when it doesn’t. If we were to live in a truly free society, religious speech would be treated no differently than other forms of speech.

That’s how you know these people are crazy. They’re not interested in the facts, only promoting their own propaganda. You knew that the moment they tossed out the comical phrase “militant atheism.”

FFRF’s militancy is little more than a group of dedicated people writing letters to warn people that they are violating the Constitution. The attorneys there have no desire to stop the religious speech of individuals. They defend those rights. They don’t sue churches for holding worship services or after-school Bible clubs for meeting. They only request equal treatment under the law.

Damn near all of their lawsuits involve Christians who cross the legal line in a way that would make Fox News flip out if any other group pulled the same shit. Like public school coaches pushing Christianity on their athletes, or elected officials using their office to promote their faith, or the IRS allowing churches to get away with endorsing political candidates.

If atheists acted like the Christians that FFRF goes after, maybe Ryan’s group would have a point. As it stands, this is what a whining majority looks like when they realize they no longer get to trample over the minority without a fight. 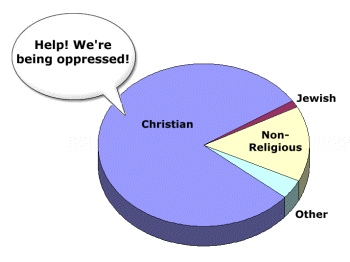 Remember: FFRF isn’t fighting for atheists to receive special treatment. They just want atheists to be treated fairly under the law — and they go after Christians who think their faith gives them permission to ignore the rules.

May 9, 2014
Ohio County Will Open Meetings with Prayer Because the Elected Officials Are Here "To Do God’s Work"
Next Post