Focus on the Family Has a Bizarre Vision of What Not-Explicitly-Christian Invocations Look Like May 9, 2014 Hemant Mehta

Yesterday, Focus on the Family’s CitizenLink posted a video about the recent Supreme Court decision allowing government prayer. They want to show that while the vote went their way, it was only a 5-4 decision… and they describe the horrors of what would’ve happened if it went 5-4 in the other direction with mock invocation and all: 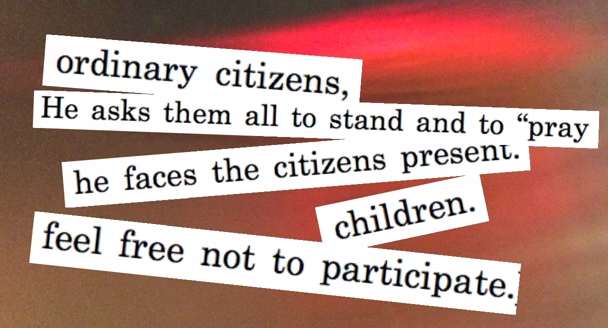 Essentially, they want to scare you into thinking that if explicitly Christian prayers aren’t allowed at government meetings, then all invocations will just be meaningless for everybody.

Because no one else matters to them but other Christians.

Since they can’t be honest or put themselves in the shoes of outsiders, I will. It’s entirely possible to deliver inclusive invocations. In fact, the few times atheists have given them, they’ve been very welcoming of everybody in the room. Many religious figures have done the same.

If Focus on the Family can only envision invocations that exclude many people, maybe we would be better off if elected officials saved their prayers for before the meetings and just got down to work when they’re on the clock.

May 8, 2014
Saudi Blogger Punished for "Insulting Islam" is Sentenced to 10 Years in Jail and 1000 Lashes
Next Post

May 9, 2014 Petty Vandalism Against Atheist Adopt-a-Highway Sign in Nebraska
Browse Our Archives
What Are Your Thoughts?leave a comment