Saudi Blogger Punished for “Insulting Islam” is Sentenced to 10 Years in Jail and 1000 Lashes May 8, 2014 Hemant Mehta

Last year, 30-year-old Saudi Arabian blogger Raif Badawi was punished for starting a progressive website that called for, among other things, religious tolerance and women’s rights. That was insulting to Islam, said his critics. He was sentenced at the time to seven years in prison and 600 lashes.

His sentence was overturned last year… but that respite was brief. Yesterday, Badawi was given an even harsher punishment:

To make matters worse, a Saudi court recently jailed Badawi’s lawyer, Waleed Sami Abu Al-Khair, for his human rights activism (more on that story here). Which means Badawi is struggling to defend himself in a criminal justice system that is already stacked against “offenders.” 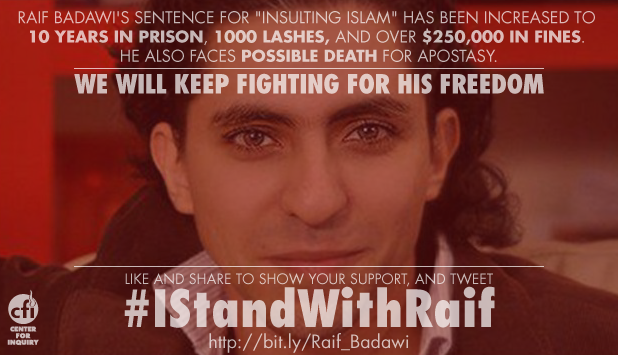 The Center For Inquiry, which has followed this case for some time now, has a list of government officials you can write to and a hashtag you can use online (#IStandwithRaif). Beyond that, I’m sorry to say, it doesn’t appear there’s much we can do for him right now.

May 8, 2014
Highlights from Sam Harris' Interview with Ayaan Hirsi Ali: Islamophobia, Western Hypocrisy, and the Best Prank Ever
Next Post

May 9, 2014 Focus on the Family Has a Bizarre Vision of What Not-Explicitly-Christian Invocations Look Like
Browse Our Archives
What Are Your Thoughts?leave a comment