S.E. Cupp Accuses Bill Nye of Bullying Others with Science May 8, 2014 Hemant Mehta

S.E. Cupp Accuses Bill Nye of Bullying Others with Science

On CNN’s Crossfire the other night, conservative atheist host S.E. Cupp invited Bill Nye the Science Guy on the show to talk about climate change.

Her argument (and I’m giving her the benefit of the doubt here) was that the public doesn’t think climate change is really a problem. So how come scientists who say otherwise can’t get through to them?

That’s actually a great question. But the way she handled the conversation made it sound like scientists were doing something wrong by teaching the public about the facts. 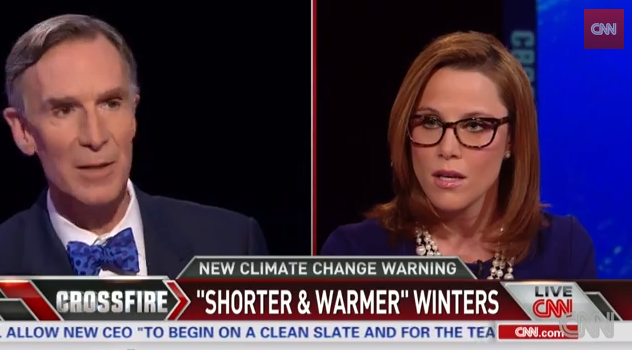 Cupp: Even if what [former White House environmental adviser and Crossfire co-host] Van [Jones] and the White House are saying is all true, the scare tactics have not worked.

Cupp: … Whatever Van is doing to scare the public is not changing public opinion.

Jones: Inform the public, but go right ahead.

Cupp: Bill, isn’t it a problem when science guys attempt to bully other people? I mean, Nick [Loris of the Heritage Foundation] here had to say, “I’m not a denier.” He had to get it up, “I’m not a denier,” because really, the science group has tried to shame anyone who dares question this, and the point I’m trying to make —

Nye: Why is that bullying?

Cupp: It’s not working with the public.

The whole conversation goes in that direction. By being honest about where the evidence leads, even though people don’t want to hear it, Nye and other scientists are being labeled as bullies. By calling out those who can’t accept the obvious, they’re “shaming” the deniers.

It’s not bullying to be up front and honest about what the scientific evidence says. And you should be ashamed if you willfully choose to ignore the facts.

The problem is that the public has been misled into thinking science is agenda-driven instead of data-driven. They trust their pastors more than they trust scientists. Even right-wing politicians proudly proclaim their science denialism these days.

What Cupp is doing is blaming people like Nye for the public’s scientific illiteracy while using Ken Ham-style rhetoric.

Maybe public sentiment toward science would improve if supposedly-credible journalists stopped pretending that issues like climate change were topics of debate instead of settled science.

But since Cupp isn’t doing that, it takes science communicators like Nye to educate the public.

Which, at the very least, led to this fantastic exchange at the end of the segment:

(Thanks to Joshua for the link)

May 8, 2014
A Compilation of Comedy About Noah's Ark
Next Post