Public School Superintendent Says No to Graduation Prayers; Now He’s Under Fire from the Community May 8, 2014 Hemant Mehta

Public School Superintendent Says No to Graduation Prayers; Now He’s Under Fire from the Community

Finally, a public school superintendent has done something right regarding prayer at graduation ceremonies.

Superintendent Sean Rickert (below, left) of the Pima Unified School District in Arizona decided that there would be no prayers during the high school graduation ceremony this year — and he’s getting criticized by members of the community because of it: 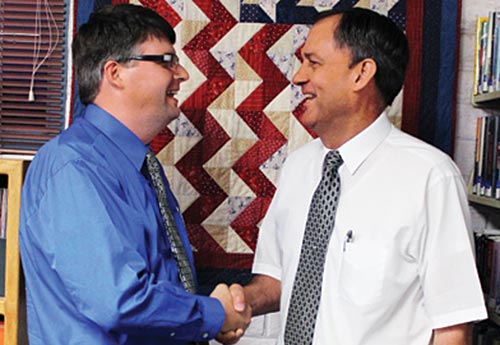 The district superintendent has said no to prayers at the graduation ceremony even though the entire senior class voted to have an opening and closing prayer.

“I was kind of upset because our class voted for prayer, and to have the superintendent say we could not have prayer for graduation, it sucked,” said Calleigh Summers.

So why no prayers? Superintendent Sean Rickert who made the decision told FOX 10; “this is a step I take as an administrator to increase the district’s compliance with the law”.

Superintendent Rickert says the school could potentially be sued by allowing prayer at a graduation ceremony but added “avoiding a lawsuit is not what is driving this. Our primary reason is to make sure we are not violating student’s rights”.

Rickert is right — even if students voted for a prayer, it doesn’t matter. High school seniors don’t get to overturn the First Amendment just because they don’t give a damn about their non-religious classmates. It’s the same reason students can’t vote to have Bible readings over the loudspeakers everyday. (Maybe these seniors should retake their government classes.) The school board should consider itself lucky that the district hasn’t been sued yet.

Remember: No one is banning prayer. Christian students and families can pray all they want throughout the ceremony. The only change is that there will be no formal prayer as part of the ceremony.

A school board meeting will be held later tonight and the school board could overturn Rickert’s decision — but if they did, they’d be showing the community that money is better spent defending a losing lawsuit than on children on their education.

May 8, 2014
S.E. Cupp Accuses Bill Nye of Bullying Others with Science
Next Post