Christian Football Coaches Could Learn a Lesson from Doc Rivers May 8, 2014 Hemant Mehta

Christian Football Coaches Could Learn a Lesson from Doc Rivers

We’re so used to hearing stories of Christian football coaches at public schools who think they can and should lead their teams in prayer. They don’t give a damn about non-Christian players on their team, always falling back on the line, “No one ever complains,” never realizing that most students don’t want to cause conflict or paint a target on their own backs.

Those coaches could stand to learn a lesson from LA Clippers coach Doc Rivers. 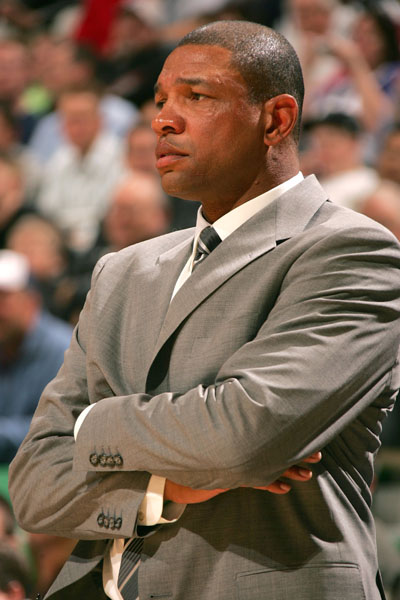 There used to be a pre-game prayer when he first coached for the Orlando Magic in 1999, but that changed when Rivers saw someone on the outs:

“I looked up in one of the prayers, and Tariq (Abdul-Wahad) had his arms folded, and you could see that he was really uncomfortable with it,” Rivers said. “So the next game, we were standing up in a circle, and I said, ‘Hey guys, we’re no longer praying.’”

So, that day, he decided his teams would keep their religious practices private as well.

“We’re no longer praying,” Rivers recalled saying to his team. “I want to take a minute. Everybody close their eyes. We all can have different religions, we have different Gods, we can just take a minute to compose. If you guys want to pray individually, you can do it. If you want to meditate, do whatever you want.

“Then, after that game,Tariq Abdul-Wahad walks in to me, gives me a hug with his eyes tearing, and said: ‘Thank you. That is so important to me. No one has ever respected my (Muslim) religion.’ He said, ‘I’m going to give you everything I’ve got.’”

Beautiful. He noticed that someone was left out and decided to change the tradition in order to keep the team unified.

To be fair, it shouldn’t have taken Abdul-Wahad’s silent protest to get Rivers to change the ritual — a more astute coach would’ve recognized that the formal prayers were divisive from the get-go, but at least Rivers took action when he noticed the problem.

How come more Christian football coaches can’t do the same?