New Hampshire Father Protests a Youth Novel, Is Arrested For Exceeding His Allotted Time at a School Board Meeting May 7, 2014 Terry Firma

New Hampshire Father Protests a Youth Novel, Is Arrested For Exceeding His Allotted Time at a School Board Meeting

In the video below, an agitated New Hampshire father named William Baer is arrested for getting mouthy at a school board meeting in Gilford, New Hampshire, two days ago. He begins talking out of turn at 0:22, and after about half a minute an honest-to-god cop motions for him to submit to arrest, which Baer, flummoxed and incredulous, ultimately does. 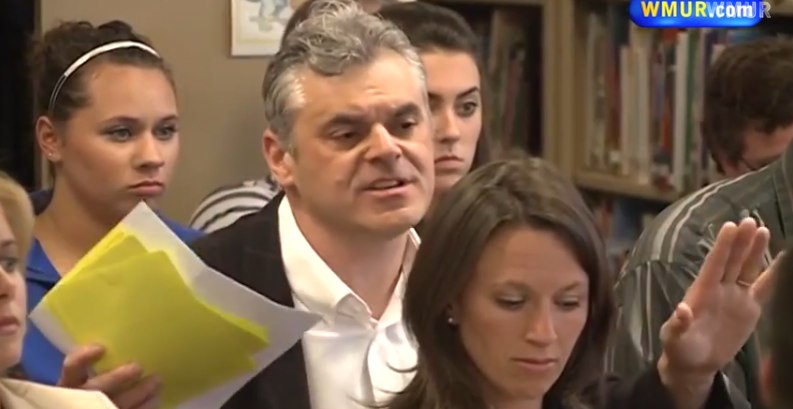 The reason for the contentious discussion is a book: Nineteen Minutes by Jodi Picoult, the fictional account of a school shooting. Some parents, Baer included, are opposed to the novel being assigned to their ninth-grade children, on account of an explicit sex scene. This one (reader discretion advised):

‘Relax,’ Matt murmured, and then he sank his teeth into her shoulder. He pinned her hands over her head and ground his hips against hers. She could feel his erection, hot against her stomach.

… She couldn’t remember ever feeling so heavy, as if her heart were beating between her legs. She clawed at Matt’s back to bring him closer.

‘Yeah,’ he groaned, and he pushed her thighs apart. And then suddenly Matt was inside her, pumping so hard that she scooted backward on the carpet, burning the backs of her legs. … (H)e clamped his hand over her mouth and drove harder and harder until Josie felt him come.

Semen, sticky and hot, pooled on the carpet beneath her.

Based on that adult material, Baer didn’t want his 14-year-old daughter to read Nineteen Minutes. Note that he didn’t want to ban or burn the book. What he did want to do was make his concern and displeasure known to the board, and have his daughter assigned a less controversial read.

To be honest, neither the passage above nor the thought of my daughters reading it at age 14 particularly faze me. But that’s just me, and it’s beside the point.

If you’ve already written off this man as a prude and a moralist — as your ideological opponent, unworthy of your advocacy — I invite you to watch the video again. Only this time, imagine that he’s saying something you agree with. Imagine him, for instance, speaking up at the board meeting because the principal has been reading a Christian prayer over the public address system every morning for the entire school year.

If Baer had done that, would you be more inclined to find his arrest creepy, unjust, and unpalatable?

Admittedly, he spoke out of turn. As far as I can tell, Baer had already talked for the allotted two minutes when he started up again. He shouldn’t have done that. But when you watch the footage, his irritation is just a brief flareup. He’s already tapered off by the time the cop puts in his unnecessary appearance. The ensuing arrest and the charge of disorderly conduct are way out of proportion to Baer’s outburst.

The most amazing thing to me is that none of the sheeple in the audience visibly or audibly react. The chair of the board doesn’t say a word to stop the wanton escalation either. Maybe she was secretly pleased by the turn of events?

I was heartened to learn that Baer is an attorney. He should be well equipped to demand satisfaction in a court of law — where I hope he’ll remind the school board and local law enforcement of New Hampshire’s state motto.

May 7, 2014
Todd Starnes Claims Fifth-Grader Isn't Allowed to Read Bible at School; Once Again, the Facts Say Otherwise
Next Post