The Family Policy Institute of Washington (state) is one of those anti-gay groups that thinks giving the LGBT community equal rights is tantamount to chaos.

Normally, I fight against groups like that. But for the past month or so, the FPIW has actually been doing something pretty interesting: They’ve been visiting places of worship for faiths other than their own in an effort to showcase non-Christian groups that “share our commitment to life, marriage, religious freedom, and parental rights.”

The articles don’t really go into controversial social issues so much as they simply introduce the Christian readers to a different religion. They’ve already visited a Sikh temple, a Catholic church, and a Seventh-day Adventist Church with no problems.

But then, last week, they posted about a visit to a local mosque and all hell broke loose.

It’s actually a fine piece. I can’t vouch for all their facts, but it sounds exactly like what someone would publish after visiting a mosque for the first time and writing up a report on Islam.

Yet, commenters began arguing that they were being exposed to “false teaching” and some even threatened to withhold future donations to the organization. (I have no clue what private emails were sent to the group, but they’re probably even more extreme than the comments still remaining on the site.)

A day after the article was posted, director Joseph Backholm sent an email to group members basically apologizing for not having “done an adequate job communicating the purpose of this series”: 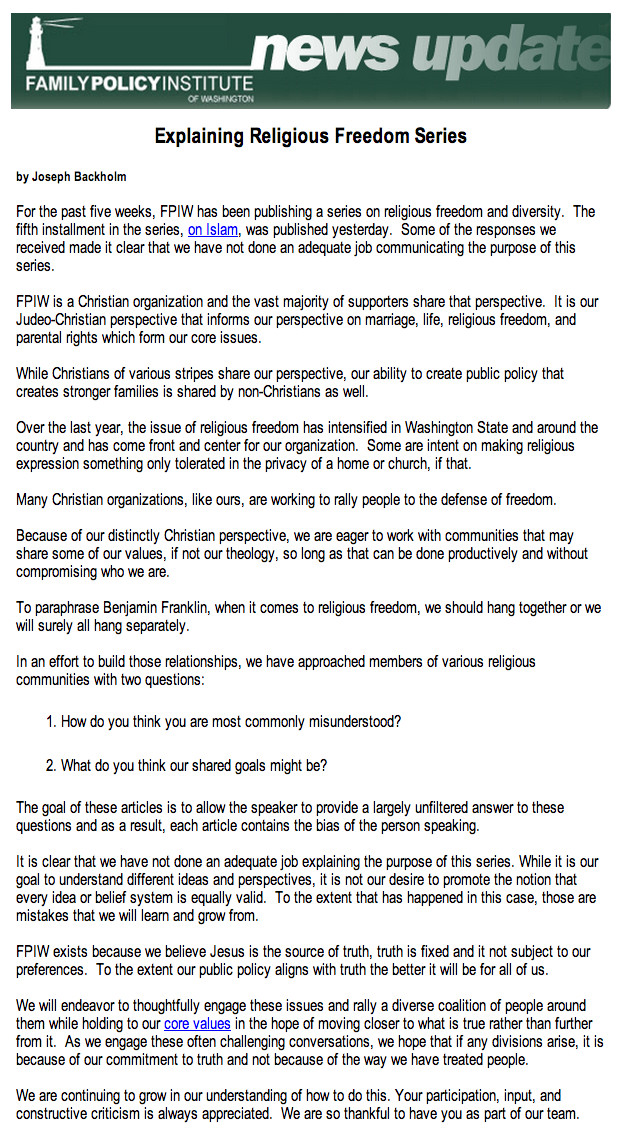 Of course, the intention of the series was always very clear. The problem is that his base includes a few too many people who think their brand of Christianity is the One True FaithTM and all other belief systems are heretical.

How’s that for members’ priorities? The group fights against gay rights and they get members and donations. They write an article about how Muslims are also kind and decent people and get lambasted for it.

I can’t wait until they all discover that gay people are normal, too. Those apology emails won’t come fast enough…

May 7, 2014
Expand Your Vocabulary, Courtesy of the Bible
Next Post

May 7, 2014 Creationist Ken Ham: Teaching Evolution to Children Reminds Me of This Quotation by Hitler
Browse Our Archives
What Are Your Thoughts?leave a comment