Watch These City Officials Struggle to Explain Why an Atheist’s Banner Was Hung Where Few People Could See It May 6, 2014 Hemant Mehta

The other day, I posted about how atheist activist Justin Vacula of the NEPA Freethought Society paid for a banner to be hung on the scaffolding in the Wilkes-Barre (Pennsylvania) public square.

Local officials hung it, but three days late and almost completely out of sight.

When Christians celebrated the National Day of Prayer in the square last week, they saw an NDoP banner… but not the one reading “Nothing Fails Like Prayer.”

Yesterday, Vacula went to City Hall to inquire about the decision. How come his banner wasn’t placed somewhere easily visible? Was there a reason?

He got a reason… and it made no sense whatsoever. Skip to the 1:07 mark of the video below:

Vacula: Why was my banner not placed in the front with the other banners?

City officials: Christians booked the public square so we put their banner in front. And “sometimes, we just do that.”

Vacula: I know they booked the square, but why was my banner placed where few people could see it? Those two things have nothing to do with each other.

City officials: [Awkward silence]… Well, do you want us to put it in the front now?

Vacula: Yes, but it doesn’t really matter anymore since the National Day of Prayer is over.

City officials: So you don’t want us to put it in the front…

Vacula: That’s not what I’m saying. I just want to know why my banner wasn’t on the front of the scaffolding when there was plenty of room for it.

City officials: Because we put the Christian banner in the front. And a Christian group had booked the public square that day.

Vacula: But that shouldn’t make a difference. I still paid for the banner.

City officials: [Confused looks] But it goes up to 11.

Okay, I threw that last line in there, but the officials clearly don’t get it. Or maybe they know exactly what they’re doing and they don’t want to admit it.

Their “resolution” is to put up Justin’s banner on the front of the scaffolding on days when no one is talking about prayer… they think they’re doing him a favor by leaving it up for a couple extra days — but they refuse to acknowledge that they shafted him by making sure no one could see it on the one day it actually mattered.

Justin kept his calm throughout the video. But my blood was boiling the whole time.

What would you do now? Just wait till next year? Get the placement of the banner in writing the next time? Forget the whole thing?

In any case, the banner with an atheist message is now on the front of the scaffolding: 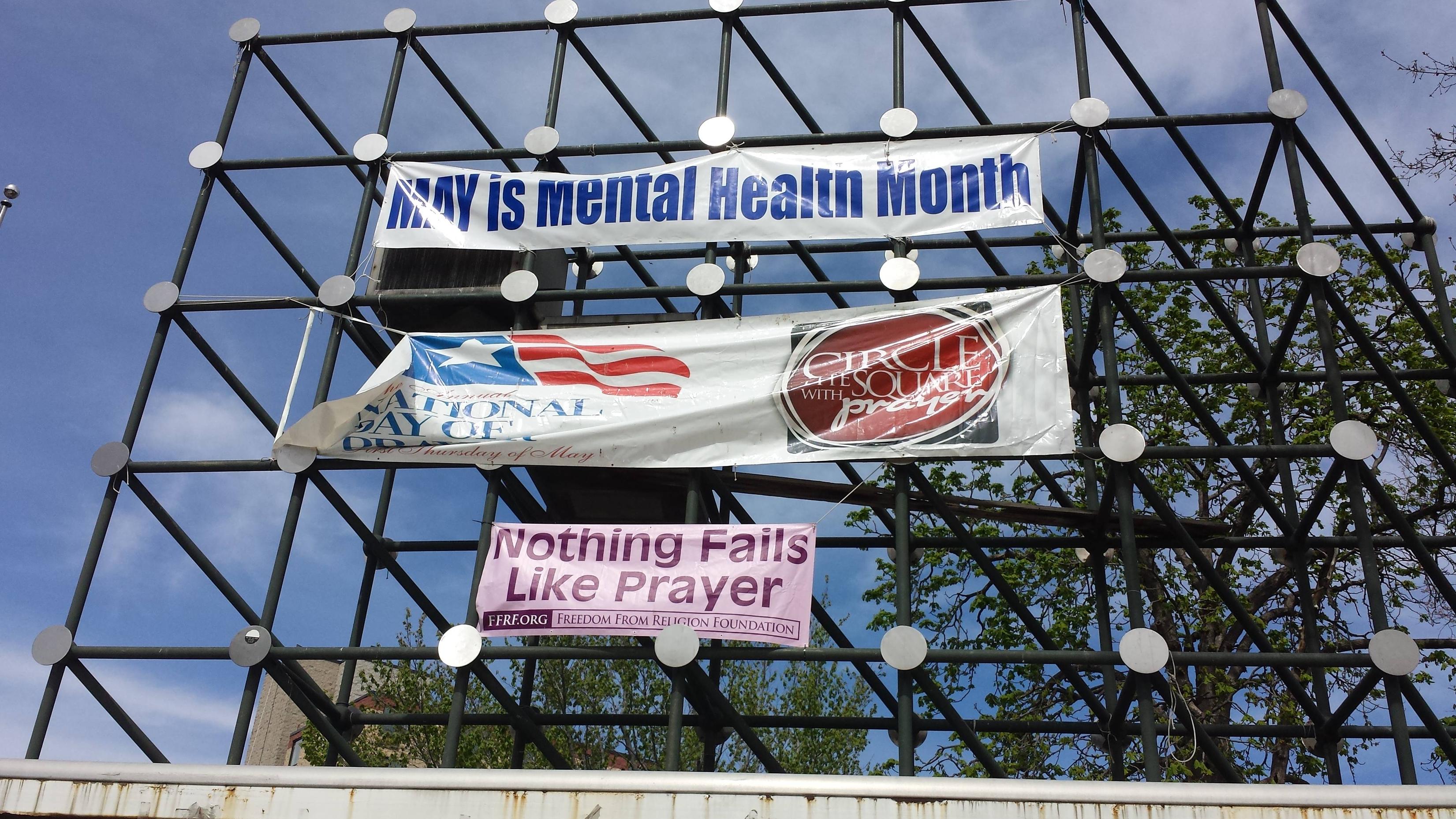 Hardly a victory. Yet very enlightening.

May 6, 2014
For April, "Astrologer to the Stars" Susan Miller Predicted a Historic Stock Market Meltdown. Guess How She Did.
Next Post