For April, “Astrologer to the Stars” Susan Miller Predicted a Historic Stock Market Meltdown. Guess How She Did. May 6, 2014 Terry Firma

For April, “Astrologer to the Stars” Susan Miller Predicted a Historic Stock Market Meltdown. Guess How She Did.

Back in January, I bookmarked an interview with well-known charlatan Susan Miller (pictured, center) that was published in the U.K. Observer — but the paper didn’t call her that. Her fans never do, of course, and journalist Aaron Hicklin is a fanboy for sure. He declared himself bewitched by “America’s most popular astrologer,” and gushed that she is

… garrulous, warm and utterly unpretentious. She is also, according to her many, many fans, uncannily accurate.

Well then, by all means, let’s take a look at the accuracy of Miller’s predictions.

The Observer piece was headlined “APRIL’S SO SCARY I’M GIVING CLASSES ON IT,” a statement that the stargazer to the stars made specifically about the stock market. So back when the interview appeared, I resolved to publicly look at April’s financial performance in early May. (Who else is going to do it? Hicklin? The celebrity astromancer herself? Fat chance.)

Here’s what Miller told the Observer:

“April’s so scary that I’m giving classes on it,” she says, tracing a series of points on her impossibly complicated astrology chart. “Look, we have a perfect square on 15 April — 15 April! You’ve got Jupiter at 12, and Uranus at 13, and Pluto at 13, and Mars at 16 — but wait! It’s going to get a little bit worse.”

She furrows her brow while she studies the chart. “Look at 29 April!” I look. “Some people feel the stock market is…” She pauses for such a long beat that I offer to complete her sentence: “… going to crash?” She shakes her head. “This is even worse — we’ve not had this since the American Revolution.”

That’s crystal (ball) clear. Miller is to be complimented on her lack of ambiguity.

OK, now here’s the Dow Jones Industrial Average of the past 30 days, courtesy of MSN Money:

Huh. That’s a pretty even month, and there was actually a 200-point mini-rally from the 28th through the 30th.

OK, that’s just the Dow. I’m sure that the NASDAQ–

Well I’ll be darned. No drama there either.

You know, I seem to remember that actually, some Wall Street analysts and financial reporters were quite elated at the end of April. Can it be? Here’s an article from CNN Money, published on April 30: 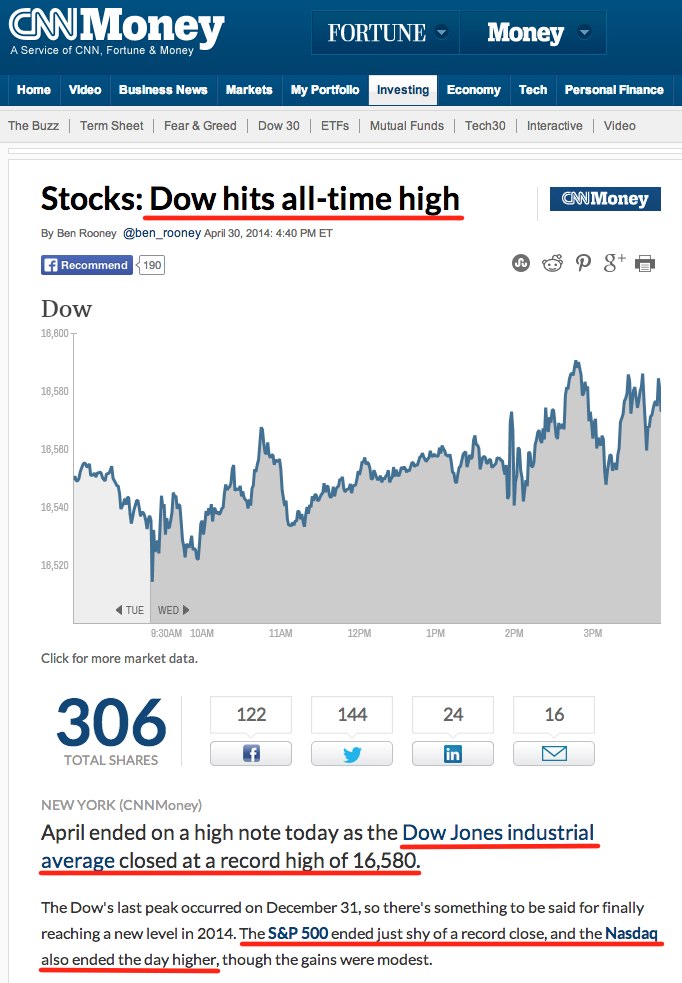 Susan, forgive me, but it’s almost as if you’re just pulling your predictions out of Uranus.

May 6, 2014
There Are Many Reasons Even Christians Should Be Disappointed with Yesterday's Supreme Court Decision
Next Post

May 6, 2014 Watch These City Officials Struggle to Explain Why an Atheist's Banner Was Hung Where Few People Could See It
Browse Our Archives
What Are Your Thoughts?leave a comment