Pat Robertson recently received a question on The 700 Club from a woman who said atheists frequently challenged her social media statements about faith — and she wanted to know if she should argue back.

Robertson couldn’t keep himself to a yes or no answer… so he decided to insult atheists instead: 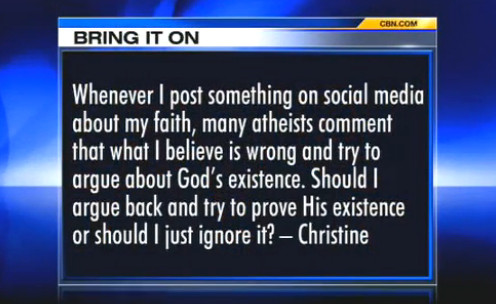 You don’t have to do that. The Bible also says, don’t cast your pearls before swine because they will turn and rend you.

A swine is hungry for nuts! He wants chestnuts or whatever nuts he eats, and he roots in the ground. And you throw a precious pearl in front of him, and he thinks, “That is another nut, I want to eat it.” And he starts to eat, and the thing doesn’t taste good. Then he gets mad, then he turns around, and he takes his tusk and he wants to gore you.

… You talk about the social media, you’ve got everybody known to man out there. But why would you put your pearls out, and why would you argue with those people? I mean, keep your stuff to yourself.

As usual, Robertson’s advice is mostly awful. If someone posts a Bible verse or religious “wisdom” on Facebook or Twitter, they should be challenged if the statement makes no sense. Too many people think a faith-based quotation deserves all Likes and no comments other than praise. I’m glad atheists are pushing back against Christine. If she can’t defend what she posts, she shouldn’t be posting it.

That’s not to say atheists should just be assholes and chime in anytime religion is mentioned. But if someone you know says something idiotic, why not correct them? Why not have that discussion? The whole point of social media is that it’s supposed to be social. Robertson’s advice is to ignore everyone but your own tribe — which is precisely what you would tell someone who’s going to lose the argument.

This is anecdotal, but there seems to be a reason so many Christian videos on YouTube close their comments while most atheist videos leave them open. Maybe that’s because our side isn’t afraid of having a debate.

But maybe we can get on Robertson’s side here with his final line. I’m all for religious people keeping “their stuff” to themselves. It’s not like we’ll be silent — so if our opinions get amplified in part because Christians are too afraid of getting pushback, let’s take advantage of it.

Still, it is pretty ironic that as Robertson tells the woman to keep her stuff to herself, he’s making comments that atheists will be criticizing. The man doesn’t even take his own advice.

May 4, 2014
Today's New York Times Features the Story of Alexander Aan, Who Spent 19 Months in Jail for Promoting Atheism
Next Post

May 4, 2014 An Atheist Paid for a Banner to be Placed in This City's Public Square... So How Come Most People Can't See It?
Browse Our Archives
What Are Your Thoughts?leave a comment