Creationist Says Pensacola Flooding is Proof of Grand Canyon Being Carved Out in Days; Geologists Say Otherwise May 2, 2014 Hemant Mehta

There’s been some nasty flooding in Pensacola, Florida over the past few days and Creationist Eric Hovind used the tragedy to his advantage.

In a video he uploaded yesterday, Hovind is seen interviewing people whose streets have been ruined and property damaged by the erosion. Why is he talking to them? To convince viewers that if destruction like that can happen in a short time span due to the rain, then the Grand Canyon could also have been created in a matter of days due to the mythical flood in Genesis. 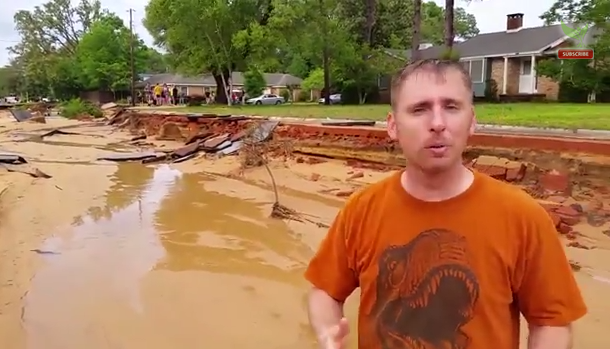 Where does he go wrong?

Last night, I asked a couple of geologists who read this site what problems they saw in the video and their explanations were incredibly helpful.

Claire Stout, who has a degree in Environmental Science, explained it this way:

This video clearly depicts that the water washed away topsoil, not the bedrock. It is also a very sandy topsoil. Sandy soil is one of the most unstable soils available. This is not erosion; it is a washout.

For example: Say you had a rock and a pile of sand sitting next to each other. If you dumped a bucket of water on them, what would the sand do? It would wash away because the individual granules of sand are not coalesced, and there is enough force in the water to lift them and carry them a certain distance. But what happens to the rock? Nothing, because it didn’t erode from one bucket of water. It just gets wet.

The Grand Canyon is not made of soil. It is made of mainly limestone, shale, schist, granite, and sandstone.

The bedrock beneath the sandy topsoil in the video was, on our time scale, unaffected. Along the geologic timescale (hundreds of millions of years), if this happens hundreds to thousands of more times in the exact same place, we might see small visual differences in the bedrock, but that happens over millions of years. The Grand Canyon has 4,000 to 8,000 feet of sedimentary layers with lots of erosion-resistant rock. Again, not comparable to a few feet of sandy topsoil.

What about the pavement breaking? Over time, pavement develops cracks in it due to temperature fluctuation. These points of weakness were most likely affected by the water force and broken apart at the seams. The water was not only on top of the pavement, it flowed through the granules of sandy topsoil beneath it. As the water increased during the storm, more and more of it tried to flow in-between the spaces of the sand, forcing the pieces of sand apart and causing lift in the ground.

Chris Peterson, a research associate at the Denver Museum of Nature and Science, told me that Hovind was really comparing apples and oranges because the geologic environments were so different:

The erosion shown in this video resulted from several feet of sediment being washed away. Pensacola lies on the Citronelle Formation which consists of unconsolidated gravel and sand… In other words, there’s no rock.

The Grand Canyon is not unconsolidated. All the different layers we see along its sides are solid rock. The softest are sandstones, which are still much more difficult to erode than sand or clay, and there are also very hard layers, granites and schists, which even with a volume of water like that in the Colorado require thousands of years to produce significant erosion.

I’ve reached out to Eric Hovind last night with this information to get his response. He hasn’t written back yet. In any case, I hope he’s safe. And I hope he’s ready to apologize for spreading this misinformation.

May 2, 2014
An Average Day in Church-Land: These Google Headlines Are From the Last 24 Hours Only
Next Post

May 2, 2014 Christian Debater Gets Outwitted by a Seventh Grade Atheist
Browse Our Archives
What Are Your Thoughts?leave a comment