Caught on Tape: Subway Preacher’s Own Argument Gets Used Against Him May 2, 2014 Hemant Mehta

Caught on Tape: Subway Preacher’s Own Argument Gets Used Against Him

Here’s an awkward situation for everyone involved: You get on the subway and a preacher begins yelling out the gospel message because he believes this is an effective way to make converts out of people. (He’s also very bad at reading everyone’s body language.)

Most people just lower their heads or look away. Because maybe if you ignore the crazy Christian, he’ll just go away.

But a couple of night’s ago, one hipster decided to engage the preacher in a debate and the team from Cult Comedy happened to be there to get it on film: 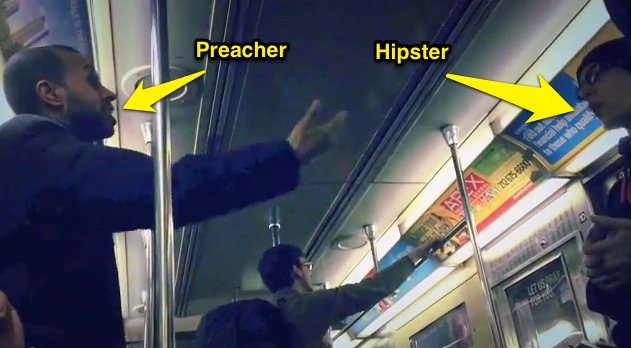 At first, the preacher was into it. He was apparently arguing that technology was bad and that it could be used for evil.

The hipster pointed out that the Bible could be seen that way, too.

That was enough for the preacher to stop the conversation and ignore the hipster for the next several minutes. He turned his back to the one person trying to dialogue with him and started preaching again to the dozens of other people actively trying to ignore him. 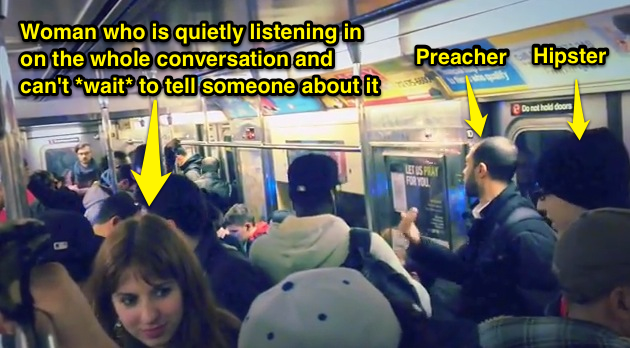 Hipster, I don’t know who you are, but I salute you for speaking up for everyone who just wanted the other guy to disappear.

May 2, 2014
A Compilation of Lawrence Krauss' Best Arguments and Retorts
Next Post

May 2, 2014 Conservative Christian Group Calls a Mississippi Anti-Discrimination Sticker a Form of Anti-Christian Bullying
Browse Our Archives
What Are Your Thoughts?leave a comment