If you’re saying something offensive, how do you remove yourself from all responsibility so that people don’t get mad at you? Simple. Just say you’re quoting the Bible.

That is the wisdom that Pastor Dean Inserra has in a video interview with Ethics & Religious Liberty Commission’s Dan Darling. Darling asks Inserra how he can preach against homosexuality without getting everyone all riled up — and Inserra thinks the Bible gives him cover for spouting bullshit: 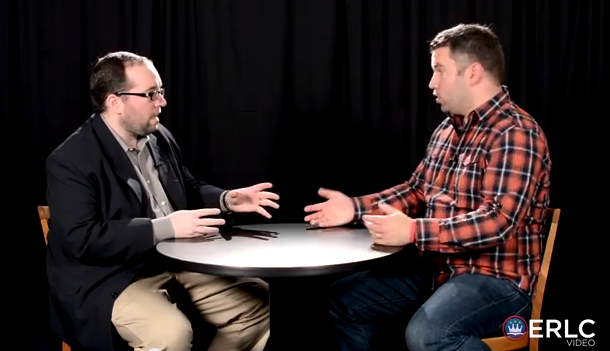 Inserra: Let’s let them be offended by the Bible and not by us. So I’m gonna be very clear when I speak. I’ll even, like, kind of call time out and say, “This is what the Bible says.” Doesn’t matter what I think. I’m just a guy…

A lot of the media accusations of, oh, you’re closed-minded. Oh, you’re intolerant. Why don’t you just co-exist?… I think that mainly comes from a fringe crowd.

Later in the interview, Inserra explains what he’d tell a gay Christian:

… Hey look, from God’s word, [He] completely rejects this idea of you pursuing same-sex attraction. So I’m not trying to make you straight. I’m trying to tell you that dating anything, a male person, is not an option for you…

Inserra doesn’t think gay people should be dating, marrying, or loving people of the same gender. He think they’re better off lonely with Jesus than in a committed relationship.

Oh, I’m sorry. Inserra doesn’t think anything. He’s just a robot with no opinions of his own. He’s just parroting the Word of God.

This is why Christians like Inserra are rightfully called bigots. They hold views that are absolutely vile — but they think they can get away with it because the Bible functions as their shield. They will spread lies about homosexuality and vote to deprive LGBT people of basic human rights all in the name of faith — and then sleep well at night because they think they’ve done something wonderful and godly.

It’s despicable. And those of us on the “fringe” need to keep speaking out against it. As much as Inserra and his ilk want to deflect attention from themselves, they’re the ones who spread these myths and make LGBT lives worse. It’s their fault, not their Imaginary Friend’s.

And the best part is: All we have to do to win the battle is continue quoting their bigotry verbatim. Pastors like Inserra are the Donald Sterlings of homosexuality — all we have to do is press the play button and their words will come back to haunt them.

April 30, 2014 Founder of KKK Chapter and Alleged Killer Was Caught With a Black Male Crossdressing Prostitute
Browse Our Archives
What Are Your Thoughts?leave a comment