Owasso High School in Oklahoma has a baseball dynasty on their hands:

The Rams reached the 6A State Tournament in 2013 for the sixteenth time in seventeen years. Fifteen of those years we played in the finals, winning nine State Championships, including last year, finishing with a perfect 36-0 record. The Rams were ranked second nationally.

Very impressive, to say the least, and a large part of that success can be attributed to their longtime coach Larry Turner. In a glowing profile of the man for GTR Newspapers, reporter Terrell Lester wrote about what makes this coach so amazing:

As an Owasso teenager, Turner played baseball for Melvin Spencer and football for Gary Harper.

“I wanted to be like them,” Turner said. “A lot of things I’ve done over the years, I modeled after Coach Spencer and Coach Harper.

“We wanted to do just the right thing; treat people the way that we wanted to be treated.”

Turner and his coaching staff lead the players in prayer before games.

Together, they venture out into the Owasso community, taking part in fundraisers, visiting with veterans, participating in reading programs involving first-graders, championing Special Olympics.

“We get out and do things beyond just showing up and playing baseball,” Turner said.

Whoa, whoa, whoa… back up there. They do what?!

That single line is an admission that Turner is breaking the law in the process of coaching his team. If students want to pray on their own, it’s fine. But coaches cannot lead those prayers.

They won’t want to hear that in Oklahoma, of course. They’ll say that all the players want to participate, refusing to admit that any student who felt otherwise would be pressured to just join in for the sake of team “unity.”

For a man who’s been coaching for more than three decades, isn’t it at least possible, even in Oklahoma, that some of those players were not religious? The responsibility isn’t on them to speak up. It’s on the adults to do the right thing from the start.

On the team’s website, there’s also a picture that shows the team helping out at a local church — that by itself isn’t a problem, but who knows what further associations the team has with the church: 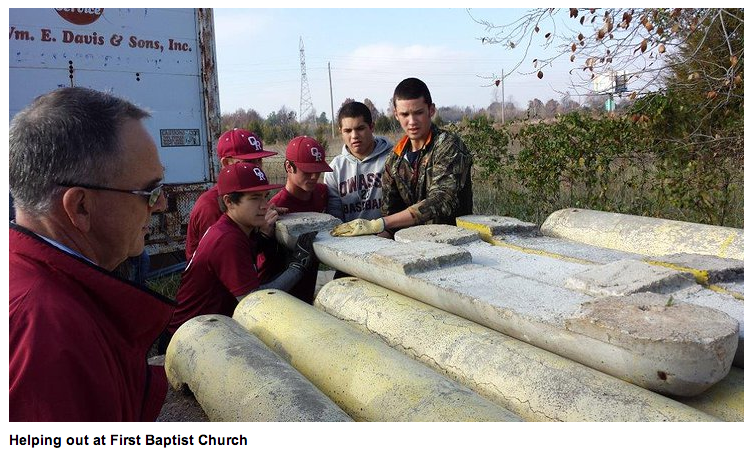 Yesterday, the Freedom From Religion Foundation sent a letter about the problem directly to district Superintendent Clark Ogilvie:

Owasso Public Schools must take immediate action to ensure that coaches do not lead, organize, encourage, or participate in prayers with their teams. The [coaches’] apparent organizing and obvious participation in a team prayer constitutes an unconstitutional government endorsement of religion. A reasonable member of the Owasso High School baseball team would certainly perceive such a prayer “as stamped with [his or] her school’s approval”…

We ask that the school district commence an immediate investigation into the complaints alleged and take immediate action to stop all school-sponsored prayers occurring at any district events. We had that you inform us promptly in writing of the steps the district takes to remedy this serious violation of the First Amendment.

You’ll be hearing more about this soon, I’m sure…

April 29, 2014 Despite Ten Commandments Monument Nearby, Atheist Group's Courthouse Bench Proposal Rejected Again
Browse Our Archives
What Are Your Thoughts?leave a comment