Will “Heresy Hunters” Purge Shiites? In Indonesia, It’s Increasingly Hazardous to Be the Wrong Kind of Muslim April 28, 2014 Terry Firma

Will “Heresy Hunters” Purge Shiites? In Indonesia, It’s Increasingly Hazardous to Be the Wrong Kind of Muslim

Extremist Muslims kill other Muslims about as often as they do Western targets.

The next slaughter of Allah fans by their fellow believers may well occur in seemingly peaceful Indonesia, if this report by Rahat Husain at Communities Digital News is any guide. 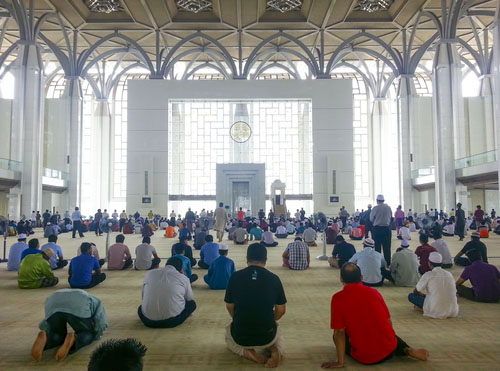 Last week, the world’s first ever “Anti Shia Alliance” convention was held in Jakarta, the capital city of Indonesia. The event was attended by thousands of participants, who called for “jihad” against Shia Muslims. Several government officials were in attendance. During the conference, a Shiite journalist who was covering the program for Ahlulbait Indonesia, reported being detained, interrogated, and beaten by group organizers and attendees. …

The alliance is a coalition of various groups who all maintain an anti-Shia agenda, including the Anti-Heresy Front, led by Ahmad bin Zein al-Kaff. In a speech, bin Zein al-Kaff said “It’s time that we declared jihad against them… We should not tolerate them anymore.”

Another part of the alliance, the Islamic Defenders Front (FPI) had its members attend wearing black ski masks and camouflage clothing, with shirts that said “Heresy Hunters.”

Shia Islam is the branch embraced by ten to 20 percent of the world’s Muslims. The majority of Muslims adhere to Sunni Islam.

In Indonesia, sizable Shia communities exist in coastal Sumatra and Madura, as well as in Jakarta. They number about one million people, among an overall Indonesian population of roughly 247 million.

Three years ago, Indonesia’s northern neighbor Malaysia declared Shias a “deviant” sect and prohibited adherents from spreading their faith. Their oppression continues today, a holdover from a centuries-old pattern of discrimination and violence against the breakaway movement.

In the early sixteenth century, Ottoman Sultan Selim I ordered the massacre of 40,000 Anatolian Shia. According to one modern source, the sultan promised that the elimination of one Shiite “had as much otherworldly reward as killing 70 Christians.”

Indonesian Shia probably don’t need to fear anything so draconian, but the threats against them, increasing in loudness, aren’t just empty rhetoric either. In 2012,

… a mob set fire to dozens of Shiite homes in Sampang [on Java], killing two Shia followers and forcing hundreds of others to take refuge in Sidoarjo, around 100 kilometers away. The Jakarta Post reported that after the Sampang burning, “Some [victims] were even forced to convert to Sunni beliefs if they wished to return home.”

April 28, 2014 New Reality Show Will Feature Women Who Want to Become Nuns
Browse Our Archives
What Are Your Thoughts?leave a comment