This morning, on Dan Caplis‘ KNUS radio show in Colorado, the host was discussing the (alleged) racist comments made by L.A. Clippers owner Donald Sterling.

And in the process, he argued that all racists had to be atheists.

You have to hear this to believe it.

The first comments were made around the 13:38 mark in the first hour of the show:

The roots of this kind of racism, this kind of attitude where somebody really thinks they’re superior to somebody, just because of the color of the other person’s skin? First, what it tells me, you know, my constitutionally-protected opinion about that person, is: they don’t believe in God. Nobody who believes in God can be a racist, in my view, because once you believe God made us, you mean, God made junk? God made somebody lesser just by virtue of the color of their skin? So my starting point is always: All racists must be atheists. They can’t possibly believe in God.

Later on (at the 47:00 mark), Caplis responded to some pushback he was starting to receive via email:

I also managed to anger some atheists this morning, because I took the position, and I think this is true… that you cannot believe in God and be a racist. Because if you believe in God, then you cannot possibly believe that God made somebody inferior just because of the color of their skin. But then I’ll read you the email from our racist friend who says that’s an insult to atheists.

No, I never said that all atheists are racists. In fact, I’ve never had that impression whatsoever, that any sort of big number of atheists were racist. My point is the opposite, or a different point, I should say. That I think, probably, all racists are, at the end of the day, atheists.

Finally, during the second hour (10:22), a reader of this site who was listening in wrote Caplis a rebuttal email, which he read on air and responded to:

… I’m not deciding for anyone whether they believe in God. I was just making the point that, having known a lot of racists during my life — I grew up on the south and then southwest side of Chicago, was around many courageous civil rights champions, such as my parents — but, in that area, I was also around many true racists, including, you know, that’s where the American Nazi Party set up.

And my impression has always been that those people can’t possibly believe in God. Or there’s no way you could think somebody is lesser just because of the color of their skin. Those two ideas just can’t fit together. But I never suggested — I apologize if it was taken that way, but never could’ve imagined somebody would think I was saying that all atheists are racists. That would be a goofy thing to say. I was just saying all racists are atheists…

Caplis’ argument, as you probably already guessed, makes absolutely no sense. While no one can speak for all atheists, it seems safe to say assholes come in all stripes and they’re not confined to just one group.

But since Caplis can’t seem to find any examples of racist Christians, let me help him out.

The Ku Klux Klan is a Christian organization. This is their website’s tagline:

Bringing a Message of Hope and Deliverance to White Christian America! 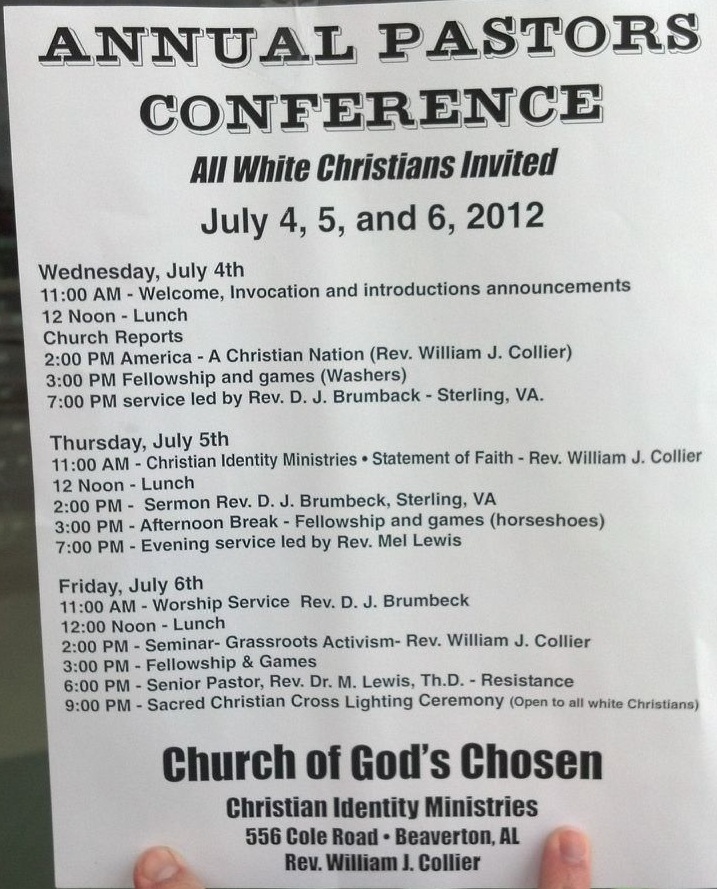 Why only white Christians allowed?

The organizer of the event, Rev. William C. Collier says that his Church of God’s Chosen (Christian Identity Ministries) is not a hate group but adds that he believes “the white race is God’s chosen people.”

… Collier said, “We don’t have the facilities to accommodate other people. We haven’t got any invitations to black muslim events. Of course, we are not invited to Jewish events and stuff.”

Mel Lewis said, “We have a right as Americans to meet, to pray, to assemble. If someone is offended too bad“

But you know how Caplis will respond to all this: He’ll just pull a No True Scotsman. Those aren’t real Christians.

The point isn’t that Christians are racist. It’s that racism isn’t limited to one group of people. There are racists of all religious faiths just as there are some racist atheists.

Oh, while we’re at it, researchers have also found that “members of religious congregations tend to harbor prejudiced views of other races. In general, the more devout the community, the greater the racism…”

For what it’s worth, Donald Sterling is reportedly Jewish, not an atheist. But his remarks, if verified, would only reflect himself, not Jewish people as a whole.

What Caplis said isn’t just untrue — it’s unfair. To lump racists into our category just feeds into the stereotype that atheists must be immoral. Racists are atheists. Liars are atheists. Adulterers are atheists. Bad people can’t believe in my God because my God makes them pure!

If Caplis — or any of the right-wing blowhards he’s trying to emulate — had said those words about any group besides atheists (“All racists are Jews!”) — there would be hell to pay and he’d be fighting for his job.

But, for now, he’s getting away with this without the slightest bit of punishment.