Over the weekend, the University of North Georgia’s Dahlonega campus held a Memorial Retreat for its Corps of Cadets. While most of the retreat went well, one portion of the ceremony stood out to the skeptics in attendance.

When a chaplain delivered the invocation prayer, it was purely sectarian, made “in Jesus’ name.” This would be a problem if that happened at a city council meeting — the Supreme Court will be ruling on that very issue soon — and it’s a problem here, too. At a public university, any invocations must be offered in a non-denominational way.

Thankfully, Saara Wintersgill of the UNG Students for Secular Freedom was in attendance and shot this video of the prayer: 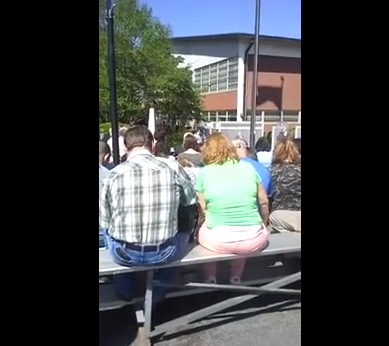 It’s appalling, really, that a group of people sworn to uphold the Constitution would so quickly violate the First Amendment.

The secular student group has started a petition with the goal of removing sectarian prayers from school-sponsored events — which, for the sake of UNG, is much better than a lawsuit — and you can sign it here:

The University of North Georgia Corps of Cadets may be nestled in the hills of the Bible Belt but we must remember that the people who make up this great organization come from all different persuasions. Many Corps of Cadets events are started with a prayer specifcally sanctioned by the Corps and each prayer is filled with specifically Christian overtones and ended with the phrase, “In Jesus’ name we pray.” A large number of these Corps events are required participation for every cadet, meaning that any cadet who isn’t Christian is required to stand in formation and listen.

Our proposed solution to this issue is to replace these prayers with a brief moment of silence for all Corps members and the attending families. This moment of silence, upheld in Supreme Court case Wallace v. Jaffree (1984), could be used by any person of any religion to pray to whomever they wish without forcing their religion on others around them or could be used by those without religion to simply contemplate and remember their fallen allies.

It’s a simple solution that would solve all the problems. Sure, some Christians will whine about the fact that a public school isn’t honoring their God, but… well… who cares. That’s not how the law works.

The students are working to meet with Corps of Cadets leader Colonel Tom Palmer to rectify the situation, but your signatures would help show that this issue matters to people well beyond the North Georgia community.

April 28, 2014
Former Archbishop of Canterbury: Britain is a 'Post-Christian Nation'
Next Post