No One Cares About This Mix of Faith and Football April 27, 2014 Hemant Mehta

No One Cares About This Mix of Faith and Football

Heather Dinich, an ACC reporter for ESPN.com, opens a story about college football players on a mission trip with a rather strange comparison: 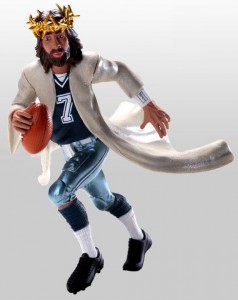 While Clemson coach Dabo Swinney has come under scrutiny recently for his intertwining of faith and football, Pitt quarterback Chad Voytik and 20 other Pitt athletes are on a mission to share their Christianity.

How is what the Pitt players are doing anything like the proselytizing going on at Clemson University?

Voytik is in Haiti right now with seven of his teammates and… there’s absolutely nothing wrong with that (from a legal standpoint). No church/state separation group will ever try to get in their way.

Unlike what’s happening at Clemson, the coach didn’t pressure the players to do this, nor did anyone use the college’s resources to make the trip happen. No rules or laws have been broken.

So let’s not pretend the two situations are comparable, even as stories about faith and football. They’re nothing alike.

April 27, 2014
A Reverend Speaks Up in Defense of Alleged Atheist Caught in the Middle of South Carolina Political Battle
Next Post

April 27, 2014 Eating Children: For Atheists, It's More Than Just a Pleasant Pastime
Browse Our Archives
What Are Your Thoughts?leave a comment