Christian Student Gets Rejected from Therapy Program… So, Of Course, He’s Suing for Religious Discrimination

Todd Starnes must be running out of Christian martyr stories because he’s grasping at straws in his latest tale.

Last April, Brandon Jenkins applied to get into a Radiation Therapy program at the Community College of Baltimore County. The program was competitive, so he had to do an in-person interview. Unfortunately, even after that, they didn’t accept him. 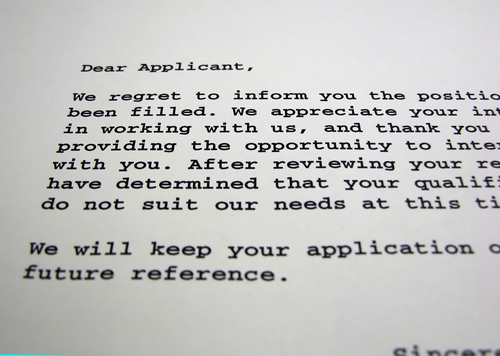 To no one’s surprise, Starnes and conservative David French have concluded that Jenkins’ faith is to blame for the rejection. The American Center for Law and Justice (a Christian advocacy group) has already filed a lawsuit against the school.

Here’s what we know about Jenkins:

Each one of those things alone didn’t hurt his chances, but together, you can understand why other students might have seemed like better candidates for the program.

And then, supposedly, the interviewers asked Jenkins: “What is the most important thing to you?” He replied, “My God.” And that was that.

In his rejection email, the program director told Jenkins the following:

I understand that religion is a major part of your life and that was evident in your recommendation letters, however, this field is not the place for religion. We have many patients who come to us for treatment from many different religions and some who believe in nothing at all. If you interview in the future, you may want to leave your thoughts and beliefs out of the interview process.

How anyone could get that from a two-word answer, I don’t know, but that’s the crux of the ACLJ’s case. It seems pretty obvious, though, that Jenkins talked about his religion in other capacities. Maybe his recommendation letters came from people attesting to his strong faith but not the qualifications you need to be a good therapist. How come Starnes doesn’t get into any of that…?

In any case, a reasonable person reading that part of the letter would think the director was just offering some helpful advice: Don’t talk about your religion in a professional interview. That’s excellent advice — I’ve received it myself, regarding my own activism. But the director is among those being sued for offering the useful advice. Not only that — she offered to put Jenkins in contact with the director of another program that might suit him better. Because that’s what nice employers do when you’re not right for their program: They give you advice and steer you into a place that might be a better fit.

I find it hard to believe a school like that (or any school, really) would discriminate against someone for being openly Christian. In fact, I’m certain if you poll the students currently in the Radiation Therapy program, you’ll find a whole bunch of them — many of whom are extremely devout. But that would ruin the Martyr Narrative, so French never brings it up in the lawsuit. In fact, all he really has is narrow-minded speculation of what happened based on a selective reading of the rejection email.

So let’s stop reading Starnes’ story and get right back into the actual lawsuit. Maybe there’s something Starnes isn’t telling us…?

That’s it. Here’s the kicker that Starnes never mentions. It comes in a subsequent statement issued by the school:

… [While program director] Dr. Dougherty’s “words may have been inartfully stated,” they were justified because “the fact is that in any secular job or program interview it is better to have a concrete reason for wanting to undertake the training at hand than to say only that God directed one to do it. That is true for every job from astronaut to attorney.”

Whoa! How was that point not brought up earlier by the ACLJ?! (Oh, right. Christian Martyr Narrative. Got it.)

The interviewers asked Jenkins why he wanted to become a therapist and his response, far from having any substance, was essentially, “God told me to.” He couldn’t articulate an actual reason for wanting to go into the profession! It’s no different from someone answering, “My parents told me to apply.” If your best reason for applying to a program is that someone else told you to do it, you don’t deserve the seat.

Starnes doesn’t mention that. And the ACLJ doesn’t bring it up until page 12 of the 19-page lawsuit.

The lawsuit concludes with Jenkins, of course, wanting money from the school for the fact that he was just a bad candidate:

As a result of each of the Defendants’ actions, Plaintiff has suffered, and continues to suffer, economic injury and irreparable harm and is therefore entitled to an award of monetary damages, including punitive damages, and equitable relief.

Riiiiiiight. You weren’t good enough to get in, so the school now owes you money. That makes sense. If Jenkins were an atheist instead of a Christian, Fox News would be all over this in the other direction.

But let’s go back to the spin. What does Starnes think about all this?

Here’s a man who’s trying to better himself with a college education. Here’s a man trying to live the American dream only to be told he can’t do that because he believes in God. That should spark a furious fire in the heart of every red-blooded, freedom-loving American.

Yeah, people who believe in God in America have it *real* rough… Maybe one day, one of them will even become President! We can always dream…

Starnes is full of shit. Jenkins’ religion isn’t impeding him from anything. He may, however, want to work on his awful interviewing skills.

April 26, 2014
#ClemsonStrong Just Proves My Point: There's No Room on the Football Team for Non-Religious Players
Next Post