The (First) 7 Problems with the Hobby Lobby Bible Curriculum

We learned a couple of weeks ago that Hobby Lobby President Steve Green had developed a Bible curriculum for public schools and that Oklahoma’s Mustang Public Schools board had voted to approve it and become the first district to implement it. The course would focus on the “narrative, history and impact of the Good Book.” 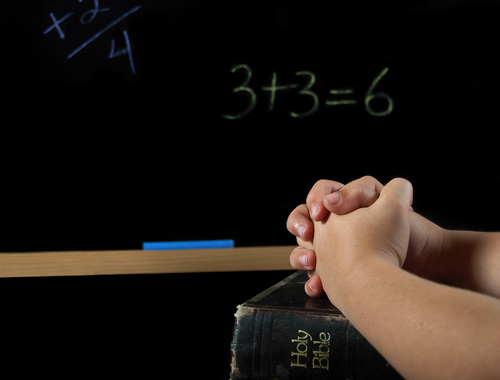 Green had said in a video that he believed the course should be mandatory, though for now, it would be an elective. (To no one’s surprise, Glenn Beck is a full-on supporter of the course.)

There are already such courses in public schools around the country and they’re legal because they don’t treat the Bible as a Holy Book. (Though even that line is crossed far more than it should.) I think most defenders of church/state separation would agree that there’s a lot of value in teaching about the Bible because of the role it plays in literature, culture, and our own history… as long as you follow a simple rule: You can teach the Bible, but you can’t preach the Bible.

That brings us to the big question about what the Oklahoma district is doing: Will Steve Green’s Bible curriculum really be objective?

The Freedom From Religion Foundation requested a copy of the curriculum last November — but they still haven’t gotten ahold of it. However, they did get their hands on the textbook for the course (from an unnamed source). And the biggest surprise may be that the cover isn’t a series of red flags.

In a letter written to Sean McDaniel, the superintendent of Mustang Public Schools, FFRF explains the problem:

The textbook does not comport with the legal requirements of a public school bible class. Its use in a public school would be unconstitutional and subject the school to serious legal liability. This letter is necessarily brief as we have only just received the materials. But even a cursory glance raised so many problems that we were compelled to write immediately.

… The materials show a clear Christian bias, treat the bible as historically accurate and true in all respects, and make theological claims, to name but a few problems. Again, these criticisms are not exhaustive, they were apparent at a glance. MPS should refuse to implement this program.

Here’s a rundown of what they discovered: 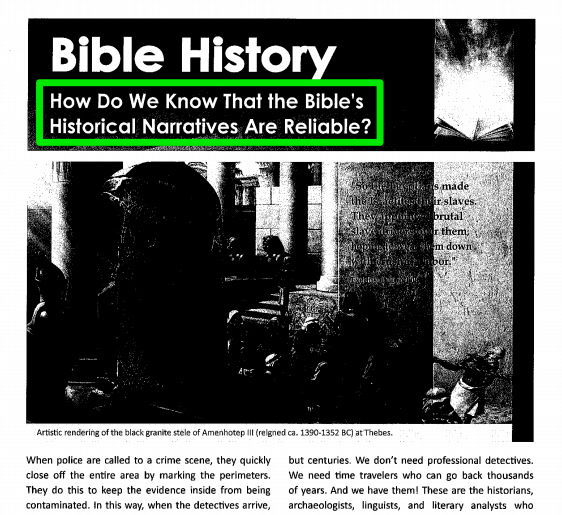 For example, instead of asking “is the bible historically accurate?” and giving a fair pro and con investigation into the question, Hobby Lobby asks, “how do we know that the bible’s historical narratives are reliable?” They assume the answer in the question and stifle all scholarly discussion. Another example, “How did the encounter at Mount Sinai become a turning point in history?” 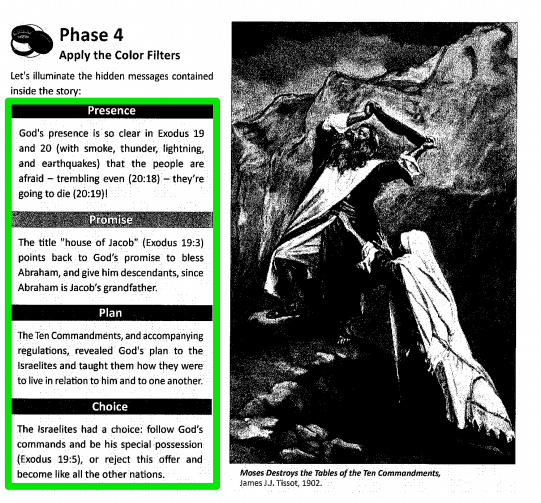 … following the story of Abraham’s attempt to murder his son, Isaac, because God demanded a sacrifice, the text reads, under the red filter: “Abraham’s bond of love with God was unbreakable, and vice versa. Even though he loved his son Isaac (Genesis 22:2), Abraham was willing to sacrifice him to God.” This is clearly an attempt to justify and explain away this horrific action. These are Christian apologetic interpretations of the bible. They cannot be part of any public school curriculum. 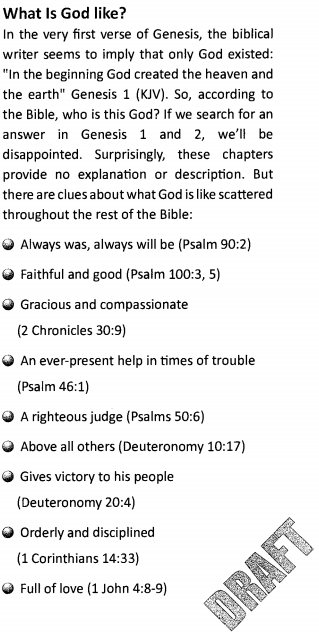 None of the negative aspects of god are mentioned. For instance according to the same bible, in the Ten Commandments (Exodus 20:5), god says “I the LORD thy God am a jealous God, visiting the iniquity of the fathers upon the children unto the third and fourth generation.” Not only does he admit that he is jealous, he promises to punish innocent children for the crimes of their parents in the Ten Commandments. Any fair, balanced listing of god’s attributes must include those that god allegedly gives himself.

The textbook utilizes only four versions of the bible, all protestant: the New Living Translation, the New International Version, the New King James Version, and the English Standard Version. Catholic, orthodox, Jewish and other biblical traditions are omitted, leaving only one particular sect. 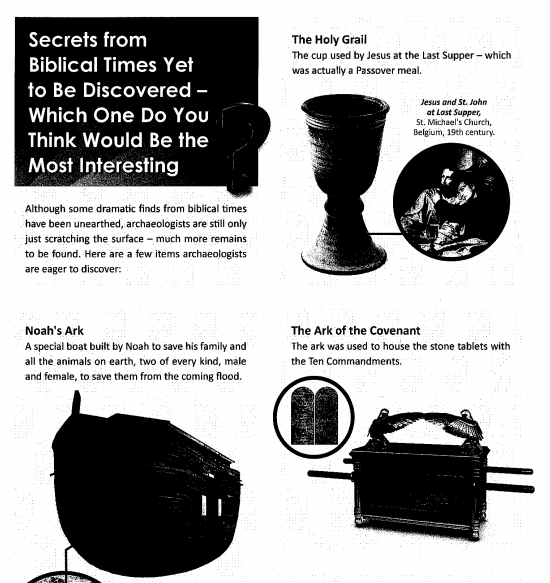 There is no critical examination of the bible’s claims or historical accuracy. The book assumes all the stories to be true, going so far as to list biblical artifacts yet to be discovered including: Noah’s Ark, the Ark of the Covenant, the Holy Grail, and Moses’ magic wand. 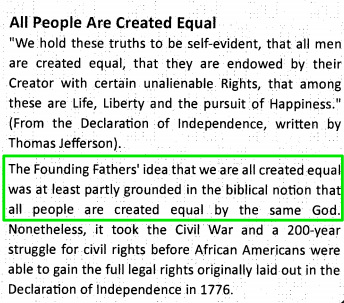 Other erroneous claims include: “The Founding Fathers’ idea that we are all created equal was at least partly grounded in the biblical notion that all people are created equal by the same God” and the attempt to co-opt the invention of the “Freedom of the Press” for the bible, instead of the American Constitution. Both are heavily disputed and dubious statements, especially given the total lack of biblical or Christian references in our godless Constitution. 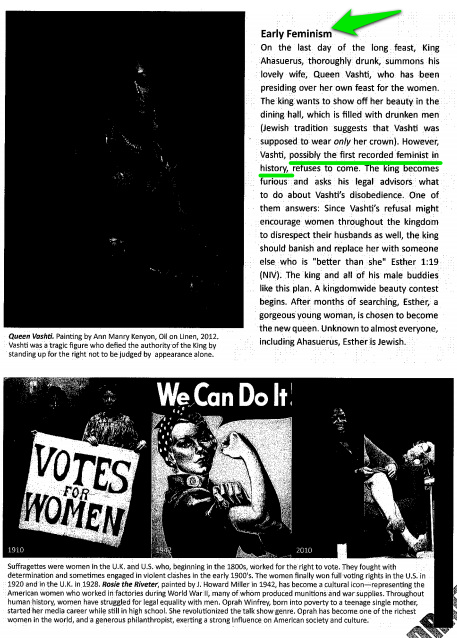 The text fails to mention that the bible subjugates women to an alarming degree. It has a picture of a suffragette, but fails to mention that suffragette leaders like Elizabeth Cady Stanton and a committee of other suffragettes were forced to rewrite the bible, dubbing their new, equality-centered book The Woman’s Bible. This page of the textbook is an affront to women, history, and the long fight to equality women have faced against biblical claims of their inferiority.

This is just a draft textbook, but if the above problems are hints of what’s to come, it’s very clear that Steve Green isn’t interested in educating students, only in indoctrinating them. For that reason, Mustang Public Schools should abandon this curriculum immediately.

And remember: FFRF has only seen the textbook and these aren’t the only problems contained within it. Who knows how many more problems are in the actual curriculum itself? If they run this class without overhauling the entire course, the district is bound to get sued — and the taxpayers would be on the hook for the school board’s irresponsible actions.

April 25, 2014
Surprise! Americans Overwhelmingly Want to Keep "Under God" in the Pledge of Allegiance
Next Post