Earlier this week, I got a bit distracted at night because I heard they were live-streaming the Ethics & Religious Liberty Commission (ERLC) conference. Since the ERLC is part of the Southern Baptist Convention… and since they were talking about homosexuality… and since I’m a masochist, I figured: “Okay, I gotta watch this.”

And I think you should watch, too. At least the panel discussion. Why put yourself through that? Because you need to understand how regressive and ignorant the largest Protestant group in America is. 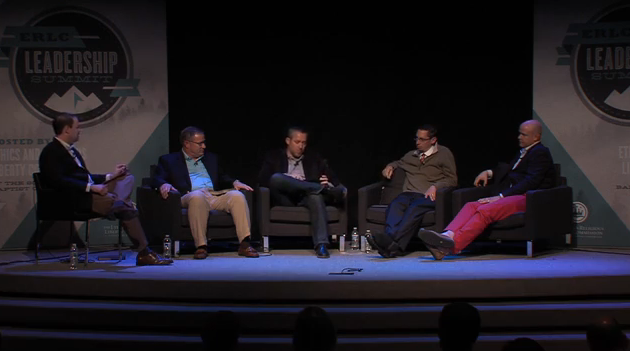 The panel — which includes Greg Belser, Jimmy Scroggins, J.D. Greear, and failed sociologist Mark Regnerus — begins at the 1:21 mark below (that’s in hours:minutes, by the way):

(If you can’t see the full video, click here.)

I can’t bring myself to listen to the whole thing again… but here’s what I remember from the video based off of a long night live-tweeting the event:

J.D. Greear, in his lecture before the panel, talked about how “homosexual people” were cured at his church. He added that he loves homosexuals, but you weren’t courageous unless you denounced them. He also compared being anti-gay to being against slavery in the Civil War South:

The panel discussed Regnerus’ flawed research. He tried to defend it, but to me, his body language suggested even he didn’t believe what he was saying — though the other panelists accepted his conclusions without question. One guy on the panel said it was controversial for church members to even write recommendation letters for gay couples that wanted to adopt a child. And Greear said he would counsel a same-sex couple to divorce — even if a child was involved — rather than suggest they stay married (in sin).

You want to know why young people are leaving the church in droves? This is why. Not only do people with these views hold leadership positions throughout the country, too many other Christians are unwilling to call them out on their bigotry. You can’t be on the fence here. What they’re saying is untrue, unkind, and flat-out harmful. They’re making the lives of LGBT people worse — and yet they lead congregations of thousands of people who cling to their every word.

By the way, the ERLC will be hosting an entire conference about homosexuality later this year. If the panel is any indication, it’ll be a disaster as far as progressive Christians are concerned.

If you hear anything particularly noteworthy, please leave a timestamp/summary in the comments below.

April 25, 2014
An Anthropology Professor Confronts Campus Preachers... and They Get the Best of Him
Next Post