An Anthropology Professor Confronts Campus Preachers… and They Get the Best of Him April 25, 2014 Hemant Mehta

James Boster, a professor of Anthropology at the University of Connecticut, recently crossed paths with preachers on his campus. They were doing their usual schtick about sin, mixed with a dash of Creationism, and Boster couldn’t help himself. He began arguing with them, tried to preach the gospel of Darwin (my words, not his) to students passing by, and basically made himself look like an asshole in the video below:

To be fair, none of what Boster says in the video is wrong, but I think he makes the cardinal mistake of trying to aggressively engage in debate a couple of people who have no desire for a two-way conversation. If you want to counter preachers who come to your campus, the only people you need to be talking to are the students. You need to win them over before the preachers do, and a lot of student groups are clever in how they accomplish that.

In the video, Boster does a poor job of making me want to listen to him (despite the fact that I’m on his side). If I were there, I’d probably just walk away from the whole embarrassing situation.

It didn’t help that UConn put out a statement denouncing the professor’s behavior:

“Everyone has the right to exercise free speech on our campuses. At the same time, we expect our faculty to act in a way that promotes civil discourse and to express themselves respectfully. The use of abusive language and a confrontational posture are inconsistent with UConn’s values.”

Christian websites are loving every minute of this, quoting the preachers who are just appalled by what they saw (and completely dismissing anything annoying they might have been doing):

“He asked me if I had accepted Darwin as my lord and savior,” [Evangelist Don] Karns stated. “He was very agitated, very demonstrative… It was very unbecoming of a professor.”

“He literally got two inches from my face and started yelling at me that I was ignorant,” [Andrew] Rappaport [of Striving for Eternity Ministries] said. “I start trying to transition to the gospel and he then tried to get the crowd to tell me to shut up.”

In the Christian News Network, Boster replied in the comments section and said that the piece did “not accurately reflect what actually transpired.” 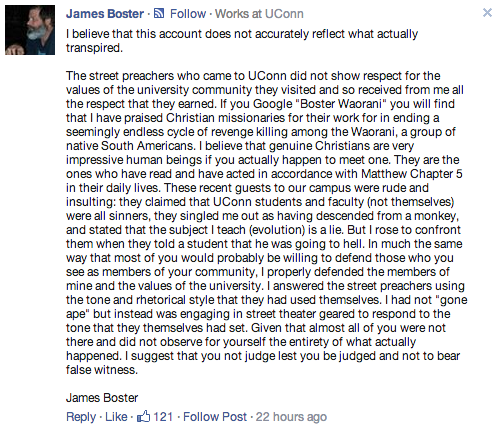 The street preachers who came to UConn did not show respect for the values of the university community they visited and so received from me all the respect that they earned. If you Google “Boster Waorani” you will find that I have praised Christian missionaries for their work for in ending a seemingly endless cycle of revenge killing among the Waorani, a group of native South Americans. I believe that genuine Christians are very impressive human beings if you actually happen to meet one. They are the ones who have read and have acted in accordance with Matthew Chapter 5 in their daily lives. These recent guests to our campus were rude and insulting: they claimed that UConn students and faculty (not themselves) were all sinners, they singled me out as having descended from a monkey, and stated that the subject I teach (evolution) is a lie. But I rose to confront them when they told a student that he was going to hell. In much the same way that most of you would probably be willing to defend those who you see as members of your community, I properly defended the members of mine and the values of the university. I answered the street preachers using the tone and rhetorical style that they had used themselves. I had not “gone ape” but instead was engaging in street theater geared to respond to the tone that they themselves had set. Given that almost all of you were not there and did not observe for yourself the entirety of what actually happened. I suggest that you not judge lest you be judged and not to bear false witness.

Like I said, you can see where he’s coming from, but the execution opens the door to so much misinterpretation and ends up backfiring. Did he persuade anyone he was right? Doubtful. They either already agreed with him or didn’t. All he did was give the preachers ammo. They thrive on attention and he was willing to supply them with plenty of it.

They were digging their own graves and Boster thought it was a good idea to give them another life.

Advice to everyone: In the future, just ignore them — or find a way to get students to laugh along with you. That’s how you diminish these preachers’ impact.

(Thanks to Luther for the link)

April 25, 2014
A New Blog for Pastors Who Are Secretly Atheists
Next Post