Oh, Pat Robertson… who are these people who write to you for advice? Who thinks he should be answering questions about, of all things, sex?

Some guy named Jason does, and he wants to know what he should do about the lack of sex in his marriage: 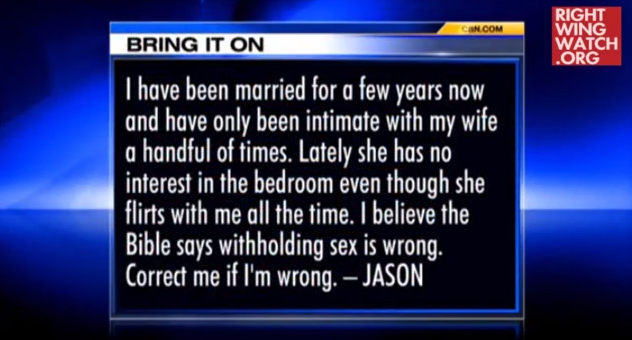 Think about what an appropriate response would be. Maybe… ask your wife about her supposed lack of interest? Maybe… go get some couples’ counseling?

Pat Robertson mentioned the counseling, but he also had some other ideas…:

… I don’t know what’s wrong with your wife, whether she’s got some psychological problem, whether she was molested as a child, you can go into all that stuff, and you really need a professional to deal with her. But that is a problem. She really wants intimacy ’cause she’s flirting with you. She wants to be attractive and have you [put your] attention to her, but at the same time, she doesn’t want to come together and consummate the marriage. That’s grounds for divorce… I would think what she needs, seriously, is to face whatever problem it is that took place in her childhood that has caused her this problem and get it taken care of.

Leave it to Robertson to not just offer his opinions, but to diagnose the issue, too. In his mind, the only reason a man’s wife would withhold sex is some deep-seeded psychological problem and not something more reasonable, like, say, sexual incompatibility or a medical issue.

It’s also incredible that Robertson would jump to divorce as a potential fix when Christians normally oppose that as an option. Divorce may ultimately be necessary (so he’s not completely wrong on that), but I’m just surprised that he so casually brought it up since most prominent Christians do just about anything to avoid mentioning it.

April 24, 2014
Sri Lanka Throws British Traveler in Jail Over Her Buddha Tattoo, Intends to Deport Her
Next Post