Dammit… I *really* hope no atheist is responsible for this…

Last week, in downtown Chicago’s Daley Plaza, the (Catholic) Thomas More Society put up a display of a giant 14-foot cross and image of Jesus. 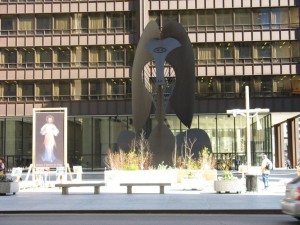 They requested and received permission to do it — and the Metropolitan Chicago chapter of the Freedom From Religion Foundation were soon to follow with a display of its own promoting separation of church and state.

Last night, the image of Jesus was vandalized: 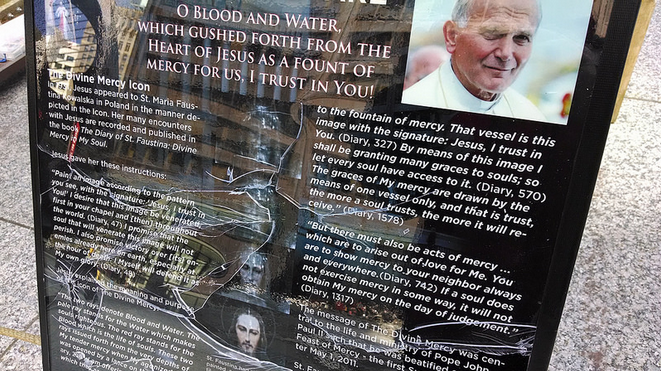 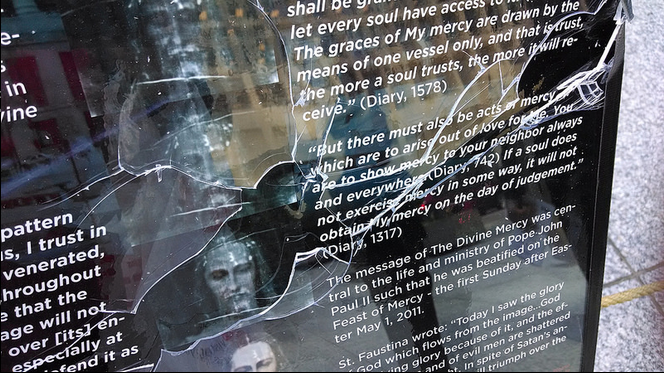 A spokesman for the group said the damage appeared to be done with a knife or other sharp object. He said the organization was unsure whether the alleged vandalism was caught on camera.

“No display — whether religious, political, or artistic — should be destroyed by those who disagree with the message,” said Jocelyn Floyd, an attorney with the society, according to the statement.

I absolutely agree and condemn the action unequivocally.

I’ve asked the president of FFRF Metropolitan Chicago to issue a similar statement of condemnation and I’ll update this post if/when that happens. I’ve also asked the Thomas More Society if there’s anything readers of this site can do to help them with recovery costs.

We may disagree with the group’s message, but they’re playing by the rules set by the city and they have every right to put up a display without having to worry about how secure it is.

***Update***: FFRF and its Chicago chapter issued this statement via email:

The national office of FFRF and the Chicago Chapter are issuing a statement this morning condemning the criminal actions.

As having been on the receiving end of vandalism against our own displays for many years now, we empathize with all others who suffer the same. Our display was also defaced in a non-destructive manner a few days earlier. Additionally, the FFRF office had received a phone call threat last Friday that our display would be torn down.

Our statement calls out anyone’s attempt to suppress freedom of speech through criminal acts as cowardly.

As part of our mission is to promote rationalism, we certainly do not consider such acts to be rational and strongly decry this.

April 24, 2014
Annaka Harris’ Children’s Book About the Virtues of Saying "I Don’t Know" is Free to Download Through Mother's Day
Next Post

April 24, 2014 Despite What This Group Says, "Homosexual Aggression" Isn't Limiting the Career Options for Christians
Browse Our Archives
What Are Your Thoughts?leave a comment