Why is This Public School’s Wrestling Team Promoting the Bible at Every Opportunity? April 23, 2014 Hemant Mehta

Why is This Public School’s Wrestling Team Promoting the Bible at Every Opportunity?

The wrestling team at Parkersburg South High School in West Virginia seems to care more about promoting Jesus than it does providing a welcoming environment for all students.

Specifically, one Bible verse — Philippians 4:13: I can do all things through Him who strengthens me — is emblazoned all over the place.

On their t-shirts, which they wore during the season: 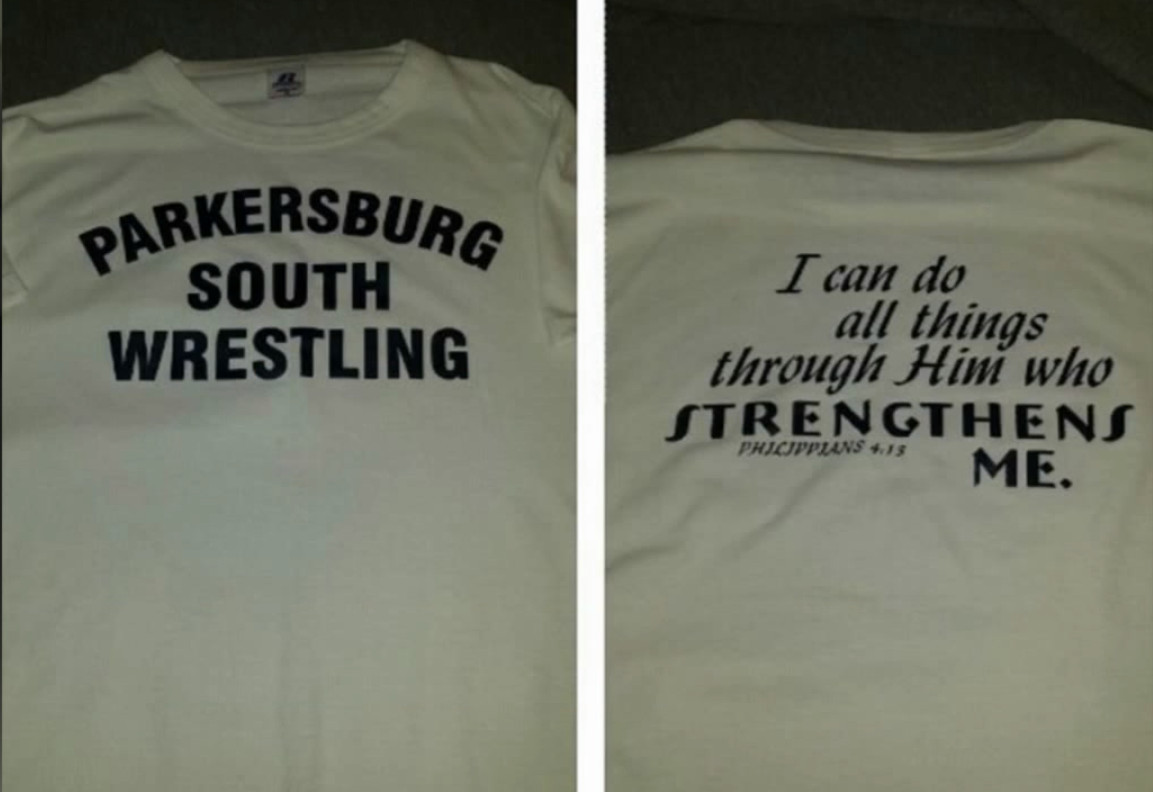 Atop their school’s gym doors: 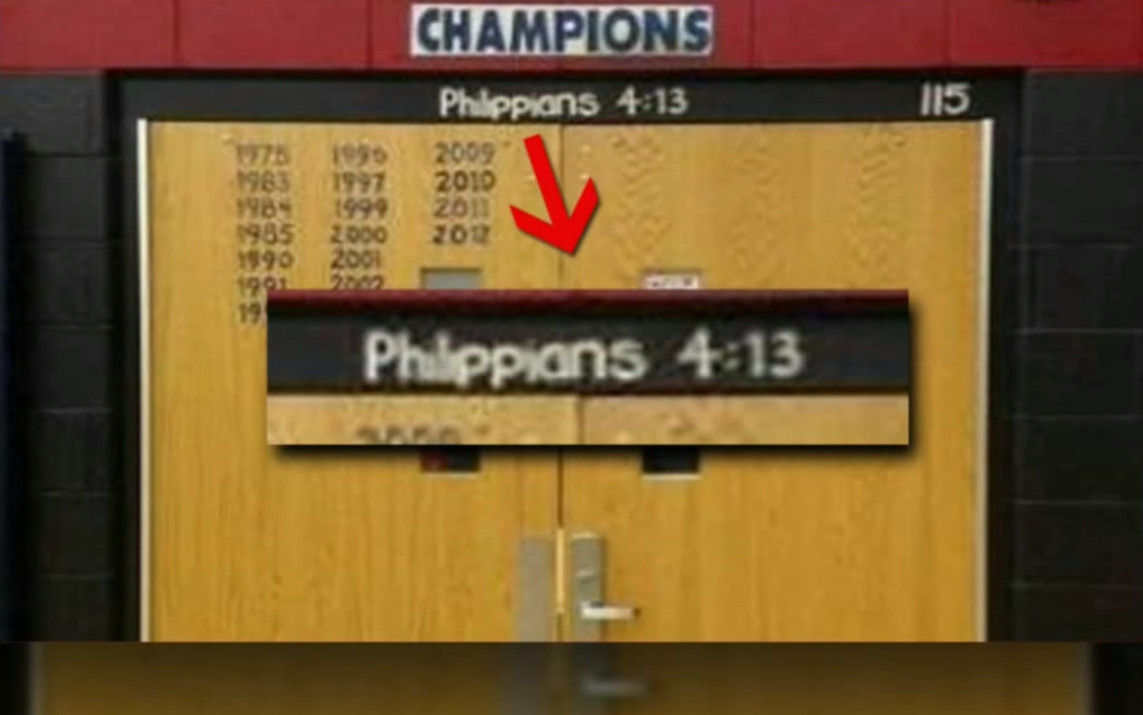 Even on their school’s website, where it was listed as the official team motto as recently as February:

Just to be clear, if this were just the students themselves making t-shirts, this wouldn’t be an issue. They have every right to do that. But when school officials allow the Bible verse to be painted in the gym and printed on the website, they’ve crossed an unconstitutional line. That’s an endorsement of Christianity, pure and simple.

After Patrick Elliott of the Freedom From Religion wrote district officials a letter warning them of the legal violations, they began to take some action.

They said they would paint over the verse in the gym. (Though they haven’t done so yet.)

And the team’s Facebook page seems to have deleted any images or references to the shirt (and they’re not responding to commenters who want to know where they can purchase one).

As you can imagine, the parents of team members are flipping out because, you know, “Christian Persecution” and all. One family even hired a lawyer who thinks that since the students aren’t forced to wear the shirts, everything should be perfectly fine.

But again, that’s missing the point. The problems are the school’s promotion of the Bible verse and the coercive nature of the shirts.

The district’s superintendent, Dr. Patrick Law, says he doesn’t know anyone on the team who complained about the message. But of course he wouldn’t know.

Imagine being on that team, where you’re surrounded by Jesus-lovin’ at all times. Are you really going to take a stand against it? I’m not saying you’d be kicked off the team, but who wants to be the least popular person in a sport where you’re dependent on the support and encouragement of your teammates? It’s much easier to just go along with the crowd and not raise a fuss.

As Katherine Stewart said so eloquently in The Good News Club about students who compete on teams where they’re surrounded by faith,

… they know that the locker room is no place for dissent, and that a refusal to participate [in the religious rituals] could easily be construed as a sign of a lack of commitment to the team. They have learned that they have to pray to play.

We don’t know who tipped off the FFRF to the problems at Parkersburg, but it wouldn’t be surprising to me if it was a member of the team who didn’t want to be publicly outed.

Of course, Todd Starnes and the usual defenders of Christian privilege are complaining about how their freedoms are under attack. Starnes says this is the work of “militant atheists,” proving that he knows very little about both law and war. To no one’s surprise, Starnes completely ignores the fact that the school’s website included the verse and that it was painted atop the gym doors. Those facts would destroy his narrative because they’re undoubtedly illegal.

Instead, he focuses on how no one complained about the motto for ten years. As if no one was bothered by this until FFRF came onto the scene. He ignores the possibility that no one said anything for so long out of fear of being harassed or picked on by “loving” Christians. Which is precisely what’s happening now.

Anyone complaining about the FFRF’s challenge needs to defend the verse painted in the gym and the verse on the school’s website. And while we’re at it, let’s see them defend all of those things if it were a verse from the Koran instead of the Bible.

They won’t do that, though. They’re too busy pretending like they’re upset because they can’t stamp lines from their holy book anywhere they want.

(Thanks to Brian and Daryl for the link)