When you join the U.S. military, you can choose to tell them your religious identification. There are more than 100 options — no problem if you’re some type of Christian, as you can see in a snippet of the list below — but the options for non-religious men and women are pretty minimal: 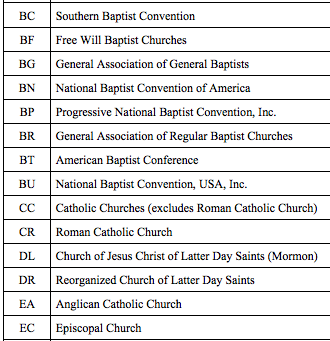 For the non-theists in the military, you can say Atheist, Agnostic, or various degrees of “Other.” If you prefer a label like “Humanist,” because it more appropriately describes what you do believe in rather than what you don’t, you’re out of luck.

Until now, that is.

After years of resisting change, the Army announced that it would add “Humanist” to the list of religious preferences, according to Major Ray Bradley:

I first requested that my religious preference be changed to Humanist in September of 2011. For over two years, I was given excuse after (often conflicting) excuse as to why this simple change could not be made. I sought assistance from the Office of the Inspector General and even my U.S. senator, but the stonewalling continued.

Ready to give up, I connected with Jason Torpy, President of the Military Association of Atheists and Freethinkers, and he put me in touch with the ACLU. Within weeks of receiving a letter from the ACLU, the Army notified me that “Humanist” would indeed be added to the faith-codes list.

You can read that letter from the ACLU right here.

This isn’t just a point of personal pride. Bradley points out that being able to check off a label on that list comes with benefits:

… with the approval of the Humanist faith code, I and other Humanists can now ask for support from the Army Chaplaincy, including space to gather regularly and to have these meetings advertised as other religious services are.

There are still no Humanist chaplains in the military, but this is at least a tiny step in the right direction. It’s just crazy that it took this long to make a simple change. The new label went into effect on April 12.

I asked MAAF President Jason Torpy for his thoughts on this change and he told me this (via email):

Major Ray Bradley showed how, if we stand up for our rights, stick together, and be persistent, we will see progress. All of those steps are important. Individual action is only the start.

Official requests from inside the military, supported by coordinated support from external organizations like MAAF and the ACLU, is how this effort was successful. Ensuring other branches recognize Humanism, increasing our visibility in all branches, and supporting the application of Jason Heap for Humanist Chaplain are the next major efforts we need to come together to support.

Many atheists lament Christian proselytism, and the best response is to stand up and demand our rights as well. Then we can all see the value of government neutrality toward religion and belief.

(MAAF, for what it’s worth, opposes asking military personnel for their religious preference in the first place.)

Major thanks go to Bradley, Torpy, and the ACLU for making this happen.

April 23, 2014 Why is This Public School's Wrestling Team Promoting the Bible at Every Opportunity?
Browse Our Archives
What Are Your Thoughts?leave a comment