Son of “Fitna” Collaborator, Like His Drug-Dealer Dad, Embraces Islam

It was one of the strangest religion stories of 2013. A year ago, Arnoud van Doorn, who came to modest prominence as a Dutch politician for the anti-immigration/anti-Islam PVV party, had a change of heart. After a period of reflection, he finally saw the light, the truth, and the way — and it was Islam. In other words, the Dutchman became a convert to the very religion he justifiably made a career out of criticizing and lampooning.

Formerly a close associate of PVV head honcho Geert Wilders, in whose 16-minute anti-Islamic movie Fitna (below) he participated as a producer or a distributor (depending upon whom you believe), van Doorn disavowed Wilders, the PVV, and Fitna. 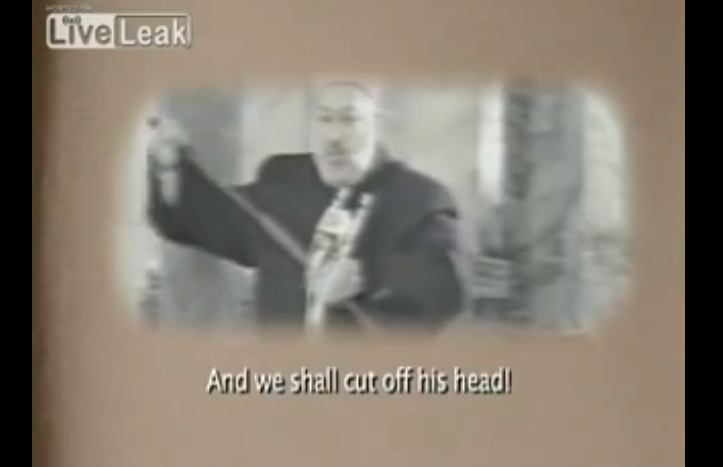 At the time, the newly-minted Dutch Muslim visited the prophet Mohammed’s mosque in Medina, Saudi Arabia, and then traveled on to Mecca for meetings with Islamic officials who presented him with a deluxe copy of the Qur’an. According to local media, van Doorn not only “wept in repentance” for his “evil deeds”; he also shed “tears of remorse.”

The son of Arnoud van Doorn, the famous Dutch policy maker and distributor of an anti-Islam film Fitna that caused unrest in 2008, surprised the audiences at the three-day Dubai International Peace Convention by  embracing Islam.

Arnoud’s son, Iskander Amien De Vrie, was one of the 37 people who converted to Islam during the convention.

And the gents are looking forward to making it a family affair:

Iskander now plans to take a trip to Saudi Arabia to perform Umrah and hopes his mother would also embrace Islam soon.

While the lad says he’d observed his father becoming “more peaceful,” van Doorn’s state of mind probably wasn’t so serene when he had to appear in a Dutch court two months ago, to answer various charges. Van Doorn was convicted for owning an illegal gun, for leaking official documents (he serves on the City Council of the Hague for the Islamic Unity Party), and for selling cannabis to two teenage boys, ages 14 and 15.

Van Doorn had previously been in trouble for repeatedly using PVV money to pay his private expenses.

Perhaps so as not to spoil a pretty story, none of the English-language Islamic media who reported on the conversion of van Doorn and his son saw fit to mention the malfeasance, the drug-dealing, or the other convictions.

April 23, 2014
A Play by @TheTweetOfGod is Coming to Broadway Next Season
Next Post

April 23, 2014 Despite Living in Another Country, This Bangladeshi Atheist Blogger's Life is Still in Constant Jeopardy
Browse Our Archives
What Are Your Thoughts?leave a comment